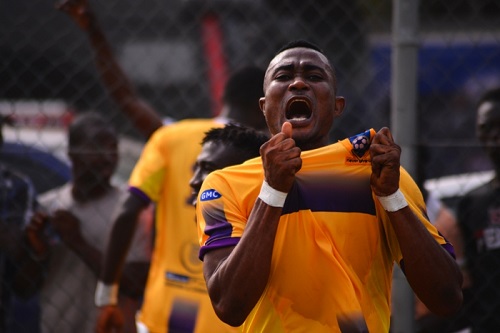 Prince Opoku Agyemang registered his ninth goal of the season for Medeama as they defeated Great Olympics in the final match to complete matchday 12 of the Ghana Premier League.

The striker bagged the only goal of the game that separated the two sides at the Akoon Park in Tarkwa.

Opoku Agyemang who was given a starting berth after missing their win over Karela United in the MTN FA Cup last week repaid coach Samuel Boadu's faith in him by opening the scores in the 20th minute that proved to be the match-winner for the Mauve and Yellows.

LIVE: Prince Opoku Agyemang scores his 9th goal of the season to give @MedeamaSC the lead against @AccraGtOlympics pic.twitter.com/ElIdikgpi3

The victory has jumped Medeama to the top of the Ghana Premier League table with 23 points and they next play King Faisal on matchday 13.

Great Olympics meanwhile, lie 15th on the log a place above the relegation zone and they have next welcomed Ebusua Dwarfs at the Accra Sports Stadium.