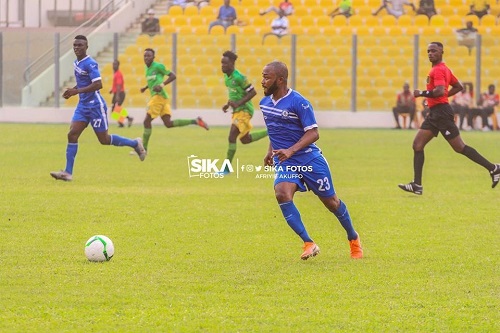 Great Olympics captain Gladson AwakoÂ has bemoaned the poor remuneration players in the local league have to endure.

According to him, the Ghana Premier League will be devoid of theÂ cream of talents if the players are not well remunerated.

He has suggested at a local league player should be paid a minimum wage ofÂ GHC 3000 a month.

"I think the minimum amount a player in the Ghana Premier League should be paid is 3,000 cedis. It is not enough though but that should be the minimum salary cap. If players in the league get paid minimum 3000 to 4000 cedis a month, I don't think any player will be rushing to play in say Togo or Cote d'ivoire or something," he told Angel FM.

The 29-year oldÂ who has been a delight to watch for Great Olympics since joining prior to the start of the 2019/20 season pleaded with the football peopleÂ to improve the conditions of service for local players in order to retain most of our stars.

"You have a situation where players are being paid as low as 300 or 400 cedis a month. How can they take care of responsibilities at home as top-flight footballers. The authorities need to do something about it."

Gladson Awako admits it's difficult for players to succeed in Ghana

Great Olympics midfielder Gladson Awako has admitted thatÂ Â it is not easy for footballers to live a comfortable life in Ghana compared to when plying their trade abroad.

According to the former TP Mazembe midfielder, the assertions that a player can make in the Ghana football is not true unless you have been given a national team invite.

Speaking to Asempa FM, Awako said the grounds are not fertile enough to allow a local based player to be financially sufficient and be comfortable in life.

''If someone claimsÂ  that you can play your career here in Ghana, succeed and enjoy life in the future, it is never true,'' the former Berekum Chelsea player told Asempa FM.

''It's either you get the chance to be in any of the national teams (then that's cool)."

''How much do they even pay us as signing on fees ? So if someone says you can play here and be very comfortable, take very good care of your kids and your family, it's false."