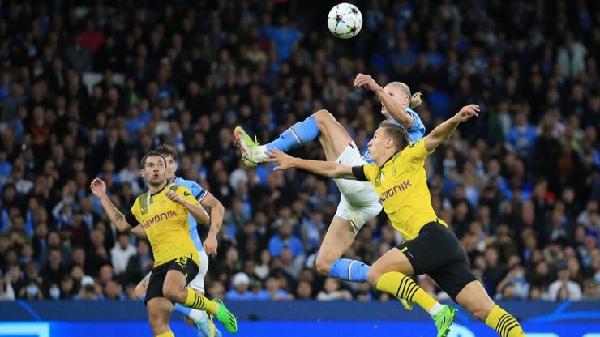 The Norwegian volleyed home Joao Cancelo’s sublime cross six minutes from time after John Stones had levelled matters just four minutes earlier with a 25-yard blockbuster.
Ahead of kick off, the stadium paid tribute to the late Queen and that would prove to be the highlight of the first half.

Anthony Modeste’s tame effort was the only shot on target as the visitors nullified City’s famed attack with a well-executed game-plan.

City finally upped the ante in the latter stages with Haaland going close with a low shot from a tight angle that clipped the outside of the post.

However, Dortmund continued to defend well and looked set for an unlikely victory until Stones and Haaland’s late, late show.

The result means City top of Group G with six points from two outings. Dortmund are second on three points with Copenhagen and Sevilla on a point apiece following their draw in Denmark.

Next up, Man City visit Wolves in the Premier League on Saturday while Dortmund host Schalke in the Ruhr derby.