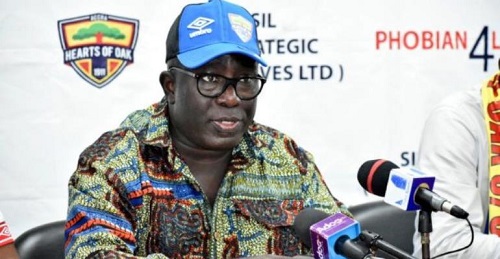 Chief Executive Officer of Hearts of Oak Frederick Moore has rated himself low after a year in office.

Frederick Moore who was named as the Phobians CEO on March 14 last year replacingÂ Mark Noonan has admittedÂ he has not lived to expectations after a year in office but is adamant the club will come good.

The Rainbow Boys are yet to win any major silverware since 2009 and the CEO says his inability to guide his charges to break that jinx makes him a failure.

"I will mark myself 3/10 because we have not win trophies under my reign. If we win, I will move from three to nine. We havenâ€™t won anything, we played the NC competition and we didnâ€™t winâ€

â€œOur core business is football, weâ€™ve got some sponsors, strategic partners and others but the most important thing that we have to achieve is to win on the football pitchâ€ He said.

â€œI have been in the job a year and few days, we havenâ€™t won any trophy so I havenâ€™t done well. When we win, not just win for one year but when we are consistently winning thatâ€™s when I will say I have done wellâ€

Hearts of Oak has had a turpsy turvy season as they lie 9th on the Ghana Premier League table with 21 points after 14 matches.

The club have beefed up their squad with the signing of Nigerien midfielderÂ Abdourahamane Mamane Lawali.