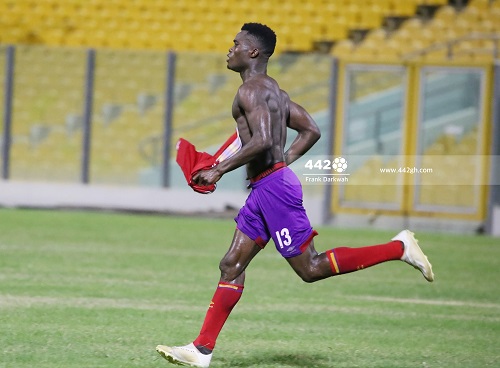 Hearts of Oak coach Samuel Boadu has provided an update on striker Kwadwo Obeng Jnr’s after the latter got injured in the Ghana Premier League matchday 26 game against Accra Lions.

According to the gaffer, he will know the extent of damage the player suffered after the doctors give him a report on the lanky striker today, Saturday, April 23.

“I spoke with the team Doctors and they are treating him now but they assured me that by tomorrow I will have the full report,” Boadu said in his post-match presser.

Kwadwo Obeng Jnr suffered a horrific injury after Accra Lions midfielder Abubakar Abdul Rashid lunged into him in the first half.

Rashid was subsequently despatched off for the incident whereas Obeng Jnr had to be replaced by Isaac Agyenim Boateng.

A brace from Daniel Afriyie Barnieh and Isaac Agyenim Boateng’s strike handed the Phobians a convincing 3-0 victory on Friday.

The game started brightly for Hearts of Oak as the returning Salifu Ibrahim’s shot was parried into the path of Afriyie Barnie who had the simplest of task by putting the ball into an empty net to make it 1-0 in the 11th minute.

Accra Lions were soon reduced to ten-men as Abubakar’s nasty challenge on Kojo Obeng Jr saw him sent off.

Hearts of Oak went into the break leading 1-0 and after the recess, the Phobians doubled their lead.

A long ball down the middle saw Agyeinim Boateng run onto it, twisted and turned and hit a feeble shot into the net to make it 2-0 in the 55th minute.

Afriyie Barnieh scored his second in the 80th minute when he headed home from a corner kick from Sulley Muntari to make the final score 3-0 to Hearts of Oak.