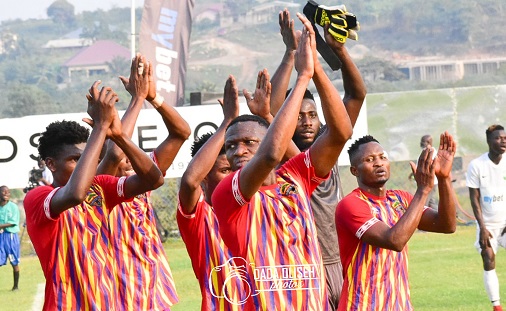 Hearts of Oak will approach the Ghana Football Association for compensation after their match week 15 clash againstÂ King Faisal was called off.

Hearts of Oak were scheduled to play King Faisal on Monday in match week 15 of the Ghana Premier League but the match was called off due to Sporting activities being put on hold following government's directive.

According to the Public Relations Officer of the Phobians, Kwame Opare AddoÂ his club will approach the GFA for compensation due to the cost incurred in the lead up of the said match.

Speaking to Asempa FM he averred that if they are compensated fair enough if not lives still moves on.

In a related development, the technical department of Accra Hearts of Oak led by Edward Nii Odoom has given the playing body a one-week break following government's suspension of the 2019/20 football season over Covid-19.

The head coach has handed the players individualÂ training programmes to work on at home despite being on break.

"Taking into consideration the current health situation that we are in, and we don't know what's next, so the technical team in consultation with other people took the decision for the players to be out of training for a week."

"However, we are monitoring the situation if after the one-week and it is still is not better then another decision will be taken again because you cannot risk human lives,'' Opare Addo said

The Ghana Football Association have suspended the Ghana Premier League following the directives given by the President of the Republic on Sunday, March 15, 2020 as the countryÂ put measures in place to fight Covid-19.