Huge boost for Liverpool as Coutinho returns to training 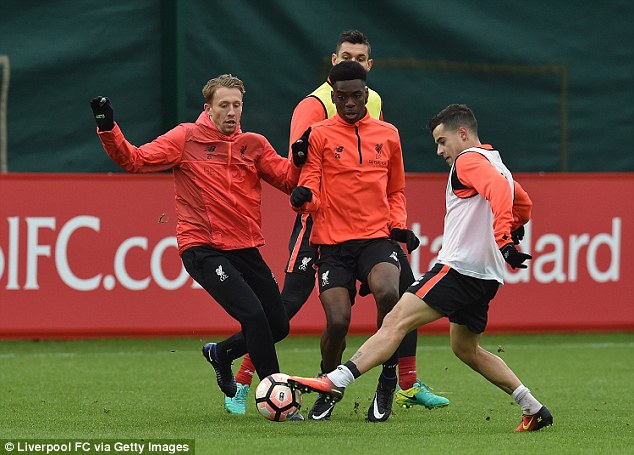 Coutinho(right) trains with the team
Shares

There was a welcome sight at Liverpool training on Friday as creative force Philippe Coutinho returned to training.

The Brazilian hasn't played for the club since November 26 after he suffered ankle ligament damage against Sunderland, but is now back on the training field as he works towards a first-team return.

Coutinho, 24, took part in running exercises and ball work with the rest of his team-mates, who are preparing to face Plymouth in the FA Cup on Sunday.

While manager Jurgen Klopp was pleased to see the midfielder return to training, and admitted his recovery was going well, he insisted Sunday's game with the League Two Pilgrims will come too soon.

Striker Daniel Sturridge, defender Joel Matip and James Milner will all miss the game with captain Jordan Henderson not due back until next week.

'Daniel didn't train until now,' Klopp said. 'It depends how he feels, that's how it is. It should be possible, but I'm not sure.

'(Coutinho is) on a very good way but not for the weekend, and (Matip is the) same.

'Milner is better. We were lucky, we had no proper injuries after the game so that's all good, but Millie had this little issue with the calf. We were not sure, because of the intensity or whatever, that it wasn't more, but I am pretty sure we will not take the risk with him for the weekend.' Mail Online