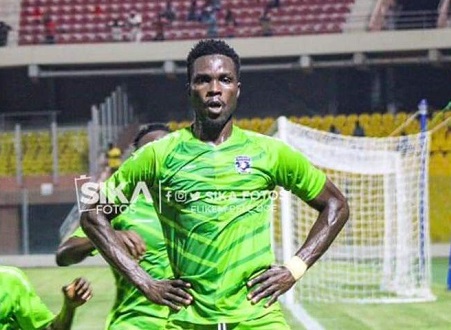 Bechem United striker Hafiz Konkoni has declared his readiness to join Hearts of Oak if they come seeking for his services.

According to reports, the Phobians are in the market for a new striker following the departure of Kofi Kordzi to Qatari side Muaither SC.

The reports add that the Ghanaian giants believe Konkoni can fill the void that will be left by Kofi Kordzi once his move is completed.

Reacting to speculation of being linked to the Accra based club, the goal poacher said he will grab the opportunity to join the Rainbow club should they come calling.

"It's an honour to play for any of the big clubs in the country and Hearts of Oak is not an exception."

"I'm ever ready to play for Hearts of Oak and restore the club to their glory days."

Meanwhile, Chief Executive Officer of the club, Nana Kwasi Darlington has disclosed that they are open to negotiating with Hearts of Oak if they want Konkoni.

He expressed their readiness to negotiate with the Phobians and interest from other clubs for their players.

"We don't have any official letter or conversation from Hearts of Oak yet. We are ready for any team willing to sign Hafiz Konkoni."