I'm not in competition with anyone - Hearts' Richmond Ayi 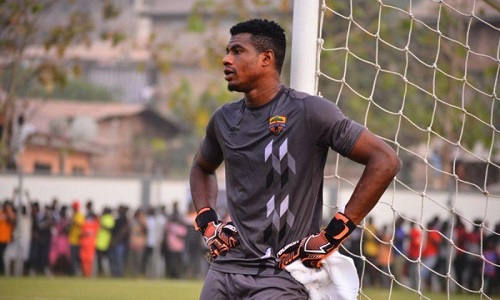 Hearts of Oak goalkeeper Richmond Ayi claims he is not to at the club to compete with anyone for the no. 1 spot.

Ayi who joined from WAFA SC in 2018 has been dislodged by new recruit Richard Attah.

Attah’s performance for the Accra-based giants earned him a call-up into the Black Stars for the 2021 Africa Cup of Nations double-header qualifiers against Sudan which was postponed due to the coronavirus pandemic.

He was also named as the club Player for the Month of February due to his splendid performances.

Richmond Ayi, however, in a recent interview with Wontumi Sports has played down any competition at the club with the former Elmina Sharks shot-stopper.

"I'm not in competition with anyone, we are all working hard for the progress of the team. When the time is due and I am given the chance to keep the posts, will do well to contribute my quota."

Ayi also reiterated that he misses football and that the stakeholder should put in measures in place to ensure the game returns. The Ghana Premier League has been on suspension since March due to the spread of the Coronavirus.

He also lamented about the impact the Cobid-19 has had on him and his club.

"Covid-19 has really affected us and even as a goalkeeper it is worrying because we were getting to our peak during the season and unfortunately virus set in."

"Individual training is not like team training, one needs to be very disciplined during this pandemic to stay active."