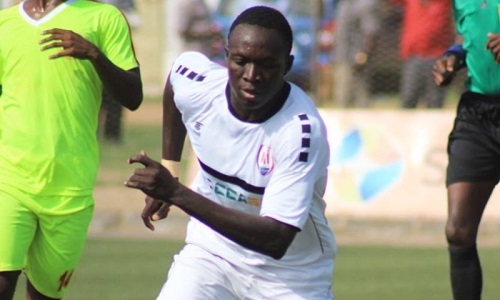 Inter Allies technical head Henrik Lehm Peters believes that Nigerien forward Victorien Adebayor will have to learn to keep things simple on the pitch if he will maintain his good start in the Ghana Premier League.

Adebayor is currently leading the scorer's chart with 11 goals but he failed to add to the number over the weekend when Inter Allies drew goalless with Ebusua Dwarfs.

Lehm is sure that if Adebayor makes better decisions he will have more goals for his game but he is also cautious that the other Inter Allies players need to help him by contributing goals.

''I think it is very important that as a coach ... everybody knows that he is a very good player but sometimes he makes the game too difficult himself and I think he did that today (Sunday)."

"Normally the big double chance he had he would score but we cannot expect him to score all the goals and some of his teammates have to start making goals."

"But today (Sunday) Adebayor made things difficult for himself."

Speaking on Sunday's goalless away draw with Ebusua Dwarfs at the Cape Coast Stadium on match week 12, Lehm Peters expressed disappointment at his outfit's failure to amass the maximum points.

â€œI think we should have won, normally, we were better with the ball, we were playing too slow but I also know the grass was pretty high but we had very big chances and I think at least we should have scored.â€

â€œIâ€™m disappointed, I think we have lost two points today but all the same itsâ€™s good because if you canâ€™t score the best is to get one point and get a clean sheet and we did that.â€