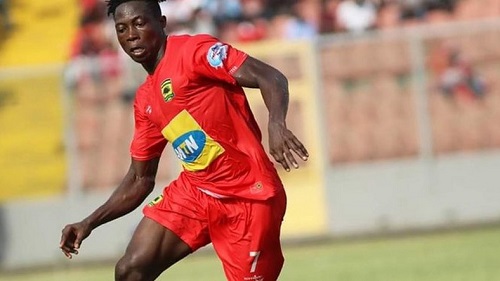 Maxwell Konadu has disclosed that Justice Blay being ruled out of yesterday's match against AshantiGold cost his side's defeat.

The Porcupines suffered a major blow ahead of the Miners clash in the Ghana Premier League matchweek 10. Blay was ruled out of the game due to Malaria after theÂ midfielder enforcer was earlier named in the starting line up to take on the Miners at the Baba Yara Sports Stadium.

Addressing the media after his outfit's stalemate with AshantiGold, Konadu indicated that the players given the chance failed to fill up Blay's absence.

"We couldn't play as we wanted to, but I think it all started when Justice Blay was taken out of the squad before even warm up.

It's unfortunate we lost him but we thought others could stand in and play as he has been doing but things could not work out as we planned."

Commenting on William Opoku being subbed after missing a glorious chance to put his outfit ahead, Maxwell Konadu said the player failed to obey instructions.

The former Karela United skipper was put through on goal in the second half with goalkeeper Frank Boateng after defender Samed Ibrahim back pass was intercepted but failed in his attempt to dribble past the latter.

"No! He was subbed because he wasn't playing to instructions in the first half we started him from the left side, knowing very well the kind style of play William Opoku plays.."

We had studied AshantiGold in past matches and knew that one error could lead to a goal. When the chance came we wasted it"

How do you fail to shoot in an instance like this? How? 😡😠 pic.twitter.com/2PAlCWaqE8