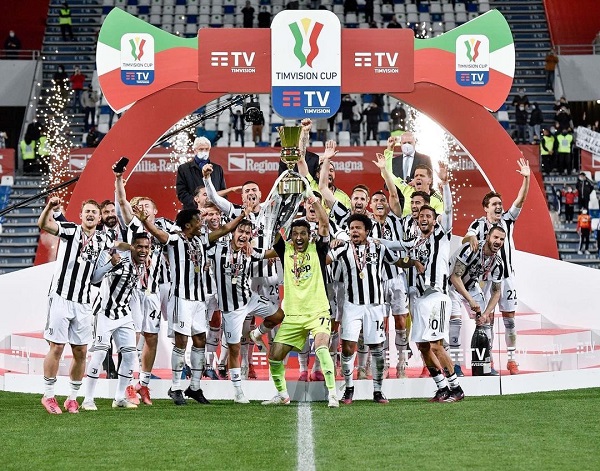 Chiesa, who had earlier hit the post from Cristiano Ronaldo's neat backheel, exchanged passes with Dejan Kulusevski to win a 14th Italian Cup for Juve.

Kulusevski had given Juventus a first-half lead with a classy curling effort before Ruslan Malinovskyi levelled.

The final was played in front of 4,300 fans at Sassuolo's Mapei Stadium.

It was the first high-profile football game in Italy to have been played in front of supporters for more than a year, after the country was hit heavily by the outbreak of the coronavirus pandemic.

Juventus, fifth in Serie A with one game remaining after winning the title for nine successive seasons, were facing the prospect of a first season without a major trophy in a decade as new boss Pirlo, who took over last summer, struggled to find his feet.

But they created the better chances throughout against an Atalanta side who were unable to add to their solitary 1963 cup triumph, losing a second final in three seasons after their 2019 defeat by Lazio.

Atalanta began well as Jose Luis Palomino was denied by the legs of veteran keeper Gianluigi Buffon but Kulusevski bent in a fantastic first-time effort to give Juve the lead.

Malinovskyi drilled Atalanta level from just inside the box but Chiesa coolly tucked underneath Pierluigi Gollini to give Juventus, runners-up on penalties to Napoli in 2020, their fifth Coppa Italia in seven seasons.

Atalanta never threatened a second leveller and their frustrations boiled over late on as Rafael Toloi, who had been substituted several minutes earlier, was sent off for dissent shown from the sidelines.