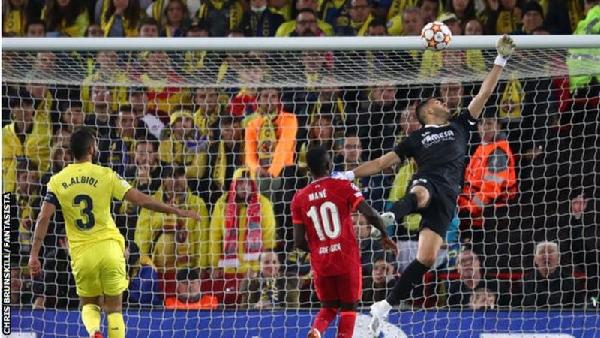 Jurgen Klopp says Liverpool will have to "be ready to suffer" in their Champions League semi-final second leg against Villarreal, despite a two-goal advantage.

An own goal from Pervis Estupinan and a Sadio Mane strike gave Liverpool a 2-0 win at Anfield last Wednesday.

Manager Klopp warned: "We have to be ready to play a top game because they will go for us."

The Reds have been European champions six times and last triumphed in 2019.

"They will try to play much more football than we allowed them in the first game," added Klopp.

"My only concern is what we do and we have to be ready to suffer. But not going 1-0 down or whatever - that can happen in football matches - but giving the game the right direction.

Forward Divock Origi returns after illness ruled him out of the 1-0 win at Newcastle on Saturday, while centre-back Ibrahima Konate, midfielders Thiago Alcantara and Fabinho, and forward Mohamed Salah are all set to feature after being rested.

Liverpool, however, will be without forward Roberto Firmino because of a foot injury, although he will travel with the squad to Spain.

The Reds have already won the Carabao Cup, play Chelsea in the FA Cup final and are one point behind Premier League leaders Manchester City as they aim for an unprecedented quadruple in English football.

Klopp's side have lost only three times in all competitions this season and, since the turn of the year, have been behind for only 69 minutes in total.

"With all these things during the season, obviously with the situation we're in, we must've done something right, that's clear," added the German.

"But the problem in our job is everything's perfect until the next game starts on the wrong foot and all of a sudden the game gets a different dynamic."

'We need to play a perfect game' - Emery

Villarreal, managed by former Arsenal boss Unai Emery, qualified for the Champions League after beating Manchester United in last season's Europa League final and have eliminated both Juventus and Bayern Munich on their way to the last four.

However, the Spanish side are only seventh in La Liga, nine points adrift of fourth-placed Atletico Madrid in the final Champions League spot, with four league matches remaining.

Therefore, if Villarreal fail to win the Champions League this season, it is very unlikely they will be playing in the competition in 2022-23.

"We need to play a perfect game," admitted Emery on Monday. "It is a difficult task, but we're working on the game.

"We need to find our excellence in certain things and maybe achieve something no-one has achieved, which is this kind of comeback.

"We will try to find some weak spots, something that no-one has done this season."