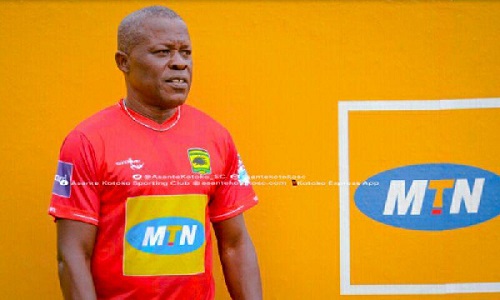 Caretaker coach for Asante Kotoko, Johnson Smith says he is happy with the payers at his disposal as his outfit don't need new recruits to achieve their aim.

Smith last October was drafted in as the deputy for former coach Kjetil Zachariisen who was sacked last month.

According to the former Karela United coach, the team have good materials that should be able to mount a strong title challenge in the coming weeks.

"I have a good squad and I am content with them, they are about 34 in number. Though some of them may be transferred to other teams, and some are opting not to renew their contract, we should be able to work with what we have,” Johnson Smith told Graphic Sports.

“I’m not bent on recruiting new ones. I will train those I have and ensure they play to my philosophy."

"I have a couple of good players on the injury list right now, like Abdul Ganiyu, Maxwell Baakoh, Richard Senanu. Hopefully, they will recover soon and join the team in good time to help us achieve our objective for the season.”

Kotoko's quest to conquer Africa ended abruptly when Etoile du Sahel eliminated them from the CAF Champions League, seeing them dropped to the second tier of the CAF competition.

Unfortunately Ivorian side San Pedro also compounded the misery by booting them out of the Confederation Cup playoff to end their Africa campaign.

However, Johnson Smith has disclosed that he is bent on returning the club to the CAF inter-club competition.

“My main aim is to by all means return the team to play in one of the African club competitions. Kotoko is a big club and as such they have to compete in big competitions", he noted.

"I am building a very strong team that can win against any team and as well play to the admiration of the fans."

“I know the supporters want to see good football so that is what I am doing. I only need time and support from Kotoko fans", he intimated.