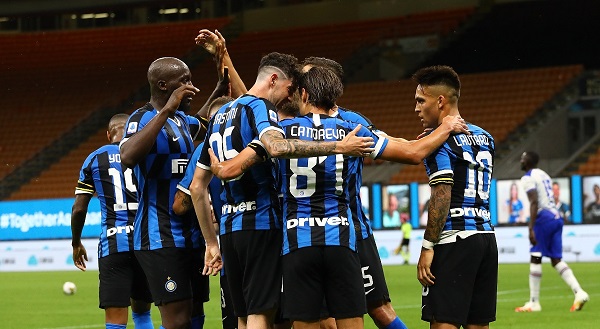 Ghanaian midfielder Kwadwo Asamoah has expressed his excitement after Inter Milan's 2-1 victory over Sampdoria in Serie A on Sunday.

Asamoah watched the entire game from the bench as The Nerazzurri recorded a slim victory in a near-empty stadium.

The Serie A returned this week after being halted since March because of the coronavirus pandemic.

Romelu Lukaku and Lautaro Martinez's strike partnership didn't lose any of its potency during the football shutdown, with both getting on the scoresheet as Inter Milan beat Sampdoria 2-1 on Sunday.

Romelu Lukaku marked his goal by taking a knee.

Lukaku, who is Black, showed his support for the Black Lives Matter movement after scoring Inter’s opener in the 10th minute — finishing off an impressive team move.

The Belgium forward posted a photo of that moment on social media after the match with the words: "This one is for all the people who’s fighting for injustice. I am with you."

Lautaro Martínez doubled Inter’s lead before Morten Thorsby pulled one back for Samp eight minutes into the second half.

Sampdoria was one of the teams which announced the highest number of cases of COVID-19, including at least seven players, with the team doctor hospitalized.

Kwadwo Asamoah has been plighted with injuries so far this season, making only 11 appearances and providing one assist for Inter Milan.