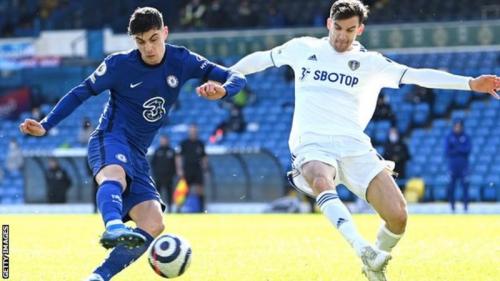 Thomas Tuchel's unbeaten run stretched to 12 games as Chelsea were held in a gripping encounter at Leeds.

Despite lacking fans to add edge, both sides were unlucky not to score as they both hit the woodwork and tested their respective keepers.

Leeds almost went behind when Luke Ayling's clearance hit team-mate Diego Llorente and looped over keeper Illan Meslier to hit the bar before Eduoard Mendy tipped Tyler Roberts' chip onto the same part of his goal.

Kai Havertz wasted two good chances for the visitors as his Premier League goal drought continued, but he impressed overall in an advanced role.

While Tuchel will be disappointed his side did not claim victory to move about third-placed Leicester, his side were given a stern test.

And his run of 10 Premier League games unbeaten since the start of a new managers' reign is second only to Nottingham Forest's Frank Clark and Chelsea's Maurizio Sarri.

Leeds, who have only won one of their last six games, were dealt a blow in the first half when they lost top scorer Patrick Bamford, on his 100th appearance for the club, to injury in front of the watching England boss Gareth Southgate.

Without fans, Tuchel might have expected a gentle introduction to the traditional Leeds-Chelsea rivalry, which stretches back to the 1970s.

But the German seemed unsettled by Leeds' director of football Victor Orta, who was a vocal presence throughout the game.

The two had a heated debate over fair play even though Chelsea kicked the ball out once they realised Bamford was injured.

Despite those distractions, the visiting side still created the best chances in a robust first half as the returning Mason Mount, Christian Pulisic and Hakim Ziyech combined well behind Kai Havertz, who played in a false-nine role.

The Â£71m signing, who has had a tough start to life at Chelsea, showed some confident touches and went close to opening the scoring in either half.

His chance after half-time was most wasteful, when he had time and space in the box, but his right-footed shot was tipped over.

Mount, who pulled the strings on the left, also set up a chance for Pulisic, who fired at Meslier, and tested the Leeds keeper from range. Ben Chilwell and N'Golo Kante were also wasteful from the left.

The fact a first-half mix-up in the Leeds defence was the closest Chelsea came to scoring would have been disappointing for the visitors as victory would have strengthened their grip on a top four-place and put them a point behind second-placed Manchester United.

But with Mendy on form against a Leeds side who continually posed questions, it means Tuchel's side have only conceded two goals since he replaced Frank Lampard in January.