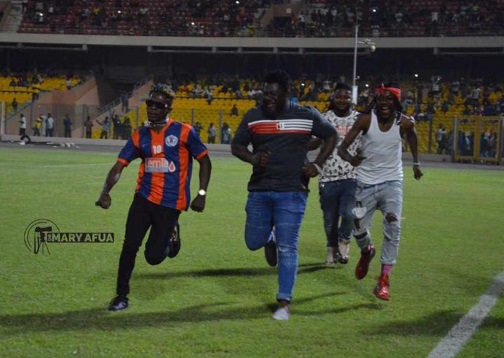 Director of Legon Cities, John Painstil has revealed whyÂ they bring artistes to the Stadium.

Legon Cities FC who changed their name from Wa All-Stars at the start of the season has managed to find the perfect balance between football and entertainment in their approach to attract numbers and grow their fanbase.

Top arts in the mould of Shatta Wale, Kwesi Arthur and AMG Medikal have already entertained fans at the Accra Sports stadium and Wendy ShayÂ added to that list when she performed on the Royals Valentine's day clash against Great Olympics.

According to the former Ghana international, the decision to billed artistes to perform at their home games at the Accra Sports Stadium is not a showoff but they are playing their part in bringing back the love as artistes also have a large following to contribute in the process.

"There are people questioning why we always bring artistes to the stadium but they should understand that those artistes bring people together,'' John Painstil told Joy FM

"We are not doing a showoff. We are doing this to help bring Ghana football back to its peak. We know what we are doing. The door is opened [for companies to invest in the club]. We want to help make Ghana football better."

The Royals occupy 14th on the League with 11 points after Friday's 1-1 stalemate against Great Olympics at the Accra Sports Stadium in the Ghana Premier League matchday 10.

They next turn their attention to King Faisal at the Baba Yara Sports Stadium on matchday 11.