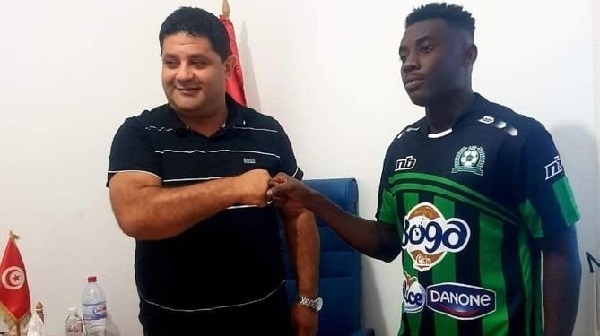 Liberty Professionals striker Elvis Kyei Baffour has completed a move to Tunisian Top-flight side AS Soliman.

The 21-year-old attacker has penned a 3-year-contract with the Tunisian club after fruitful negotiations between the two parties.

A statement from the Ghana Premier League side confirming his departure read: "Our attacker Elvis Kyei Baffour has completed his transfer to Tunisian top-flight side A.S. Soliman.

“We thank him for an amazing three-year stay and some brilliant goals. We wish him well in the next stage of his career."

Baffour was impressive for the Ghana Premier League last season where he netted 8 goals in 13 matches before the league was truncated.

Baffour joined the scientific soccer lads from Rainbow FC in Kumasi in 2017. He quickly gained the love of Liberty Professional fans that year.

In the Normalization Committee special competition, he scored 4 goals in 12 games. He was also the top scorer for Liberty in the truncated 2019/2020 Ghana Premier League. He scored 8 goals in 15 games.