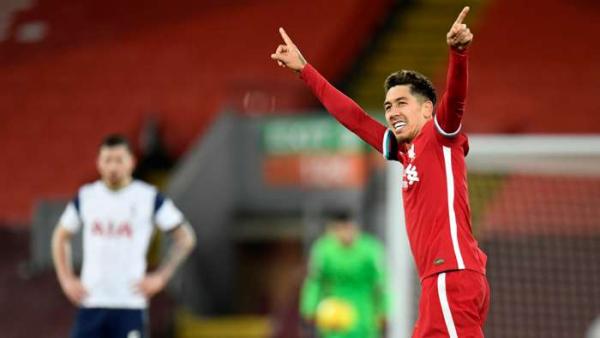 Roberto Firmino headed a 90th-minute winner as Liverpool beat Tottenham Hotspur 2-1 at Anfield on Wednesday to open up a three-point lead at the top of the Premier League table over the London club.

Juergen Klopp’s side dominated from the outset and took the lead in the 26th minute when Mohamed Salah’s shot deflected off Spurs defender Toby Alderweireld and looped into the far corner.

But Tottenham struck back seven minutes later, Giovani Lo Celso finding Son Heung-min with a superb pass and the South Korean beat Alisson with a clever and composed finish.

Despite the home side enjoying the vast majority of possession, Spurs had two great chances to go ahead with Steven Bergwijn hitting the post and Harry Kane heading wide from a great position.

But the champions grabbed the points at the death with Firmino leaping to power home a header from Andy Robertson’s corner.