Manchester City come from 2-0 down to beat Tottenham 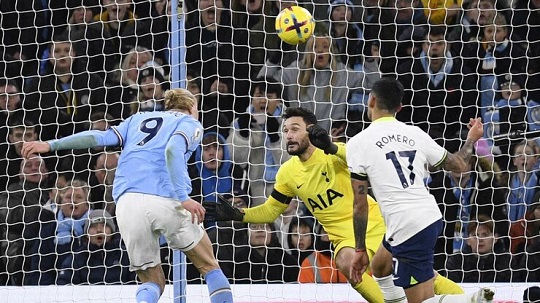 Erling Haaland ended his mini-goal drought and Riyad Mahrez turned in a match-winning performance as Manchester City responded to back-to-back defeats with a 4-2 comeback victory over Tottenham to move five points behind Premier League leaders Arsenal.

Spurs did the double over Pep Guardiola's side last season and looked on course for an incredible fifth win in six games against City when they took a shock 2-0 lead into the break following a quickfire burst from Dejan Kulusevski (44) and Emerson Royal (45+2) just before the interval.

But Julian Alvarez (51) and Erling Haaland (53) came up with a two-goal salvo for City soon after the restart - with the latter scoring for the first time in four games - and Mahrez (63), having played a part in both those goals, produced a moment of individual magic to grab one of his own and put the hosts in front. The Algerian deservedly doubled his tally for the season late on when he rounded off a fantastic second half from City by darting onto a Clement Lenglet error to dink in a late fourth.

Mahrez's first strike came just minutes after Ivan Perisic had hit the woodwork at the other end but Spurs couldn't find a response to City's second-half momentum and have now lost seven of their last 13 top-flight fixtures.

They stay fifth, five points off fourth-placed Newcastle who have a game in hand, and their wider issues were illustrated by their supporters chanting against chairman Daniel Levy and in support of head coach Antonio Conte.

City - who have charged to the title from similar deficits they currently have to Arsenal in four of their six Premier League-winning seasons - now have the chance to put the pressure on their rivals for the crown by moving to within two points of Arsenal with a win at home to Wolves on Sunday. The Gunners - who have played a game less - face Man Utd at home later that day..

Tottenham had looked set to do their neighbours a huge favour but City - who suffered a Carabao Cup defeat to Southampton and a Manchester derby loss at Old Trafford last week - avoided a third defeat on the spin for the first time since April 2018 and finally looked like their usual selves again during a statement second half.