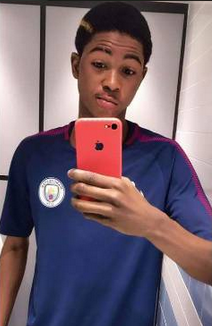 Aminu Mohammed has been signed by Man City

English Premier League side Manchester City have completed the signing of Aminu Mohammed for  £2million from WAFA.

The 16-year old who is very nimble-footed was targeted by several European Clubs including Real Madrid and Bayern Munich.

Mohammed was sent to the mother club of WAFA, Red Bull Salzburg of Austria, to train with their junior side and he joined them for the Al Kass tournament where European clubs spotted him

The winger spent two Weeks on trial with City where he impressed hence the bumper contract offerd by the Citizens.

He will be loaned out to a club in Norway, Holland, France or Belgium for him to gain playing time and valuable European experience before he will return to City.

Mohammed will now join Ghana's U17 side as they prepare for the World Cup in October and if he excels at the tournament in India he could get the special talent visa to enable him play in England.

The lanky winger missed the U17 African Championship in Gabon this year due to some agaents who planned on stealing him from WAFA and sell him to Clubs in Europe during the team's camping ahead of the tournament.