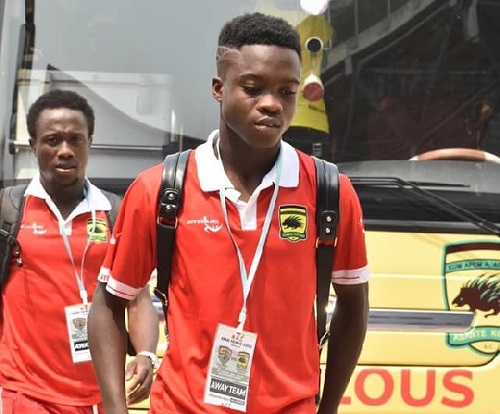 Asante Kotoko wonderkid Matthew Anim Cudjoe has donated GHC 1000 of his winning bonus from the Hearts game to injured fan, Augustine Oppong who is currently recovering.

The Porcupines beat their arch-rivals 2-1 at the Accra Sports Stadium on Sunday in the 2019/20 Ghana Premier League matchday 6 with the youngster playing a key role in the win.

After the game, the Chief Executive Officer (CEO) of Asante Kotoko, Kwame Kyei rewarded the players with GHC 2,000 each for putting up an impressive performance against their bitterest rivals.

Just as his manager, Samuel Anim Addo said that Cudjoe will be donating part of his earnings to charity because he doesn't need money now but his focus is on football, the protege has donated half of his winning bonus to Augustine Oppong who got injured in Kotoko's matchday 3 game against Berekum Chelsea at the Baba Yara Sports Stadium.
Kotoko supporters on Sunday showered money on the youngster, following his impressive display against Hearts of Oak in the Super Clash.

Cudjoe, who joined the club this season, put up an impressive display in his short cameo in Accra, and the fans showed their appreciation afterwards, mobbing him and handing him cash from across the meshed barrier at the stadium.

The 16-year-old has revealed that he was boosted by the atmosphere of playing in his first Super Clash against Hearts of Oak.

"This Hearts game is the most exciting game I've played in my career. My confidence level was so high to the extent I didn't fear anyone. I just wanted us to win".