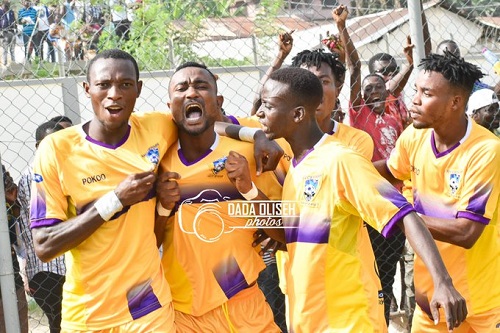 The midweek fixtures of some Ghana Premier League match week 14 matches have been honoured.

Medeama SC bounced back from the weekend's setback against King Faisal to claim a victory over Eleven Wonders at the Akoon Park, Tarkwa.

The Mauve and Yellows secured a 2-0 win over Eleven Wonders courtesy Kwasi Donsu's first-half strike and Agyenim Boateng second-half goal to consolidate their lead at top of the Ghana Premier League.

Aduana Stars travelled to the Sogakope Park to hand WAFA a shock defeat. The Ogya boys handed WAFA their second defeat in succession after the latter suffered a heavy 4-1 loss to Legon Cities at the Accra Sports Stadium on Friday.

Yahaya Mohammed scored the only goal of the game in the 65th minute to propel his side to victory. The goal sees him break his 3-match scoring drought and he is now joint top scorer on 11 goals with Victorien Adebayor.

After thumping WAFA 4-1 on Friday, the Royals were hoping to claim their fourth win of the season, however the clash with Berekum Chelsea did not go as expected.

Former Champions Berekum Chelsea eased past them with a two-goal scorelineÂ at the Golden City Park to keep up their title chase.

Bechem United also beat AshantiGold at their own back yard while King Faisal search for their first win of the season continues afterÂ Ebusua Dwarfs beat them by a slim margin.