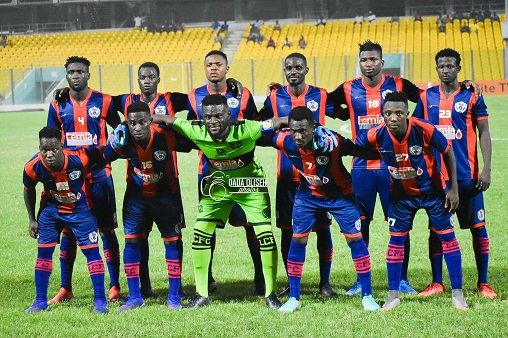 WAFA's away unbeaten run in the ongoing 2019/20 Ghana Premier League campaign came to an abrupt end on Friday as they lost to Legon Cities.

The Academy Lads got beat 4-1 at the Accra Sports stadium by Legon Cities becoming their first away defeat of the season.

The victory have also ended the Royals four-game winless run.Â

WAFA held the Royals to a scoring draw 45 minutes but collapsed in the second department as the home side run riot after the break.

However, the Royals were a different team altogether after the break and their determination for their third win of the season paid off.

Ebenezer Nii Addy shot the home into the lead two minutes into the second half, before Cephas Doku scored his second on the night in the 64th minute and Fadali Yussif put the game beyond reach in the 82nd minute.

It has been a week of mixed feeling for WAFA after their 6-1 triumph against AshantiGold last Sunday.

Earlier in the day, Asante Kotoko moved top of the Ghana Premier League after claiming victory over Karela United in week 13.

The Porcupines beat the home side at the Akoon Park in Tarkwa to record their second successive win after Friday's win against Bechem united at the Accra Sports Stadium.

William Opoku Mensah early strike separated the two sides at Tarkwa as Kotoko jumped to the summit of the log following the win.

Opoku Mensah's fourth-minute goal defeated his former side (Karela) as it is his first goal in the ongoing season.

Karela will need to pick points to climb out of the relegation zone as they sit 17th with 10 points in the 18-team league table.

Asante Kotoko next face Elmina Sharks while Karela United travel to Dawu to lock horns with Dreams FC at the Theatre of Dreams.