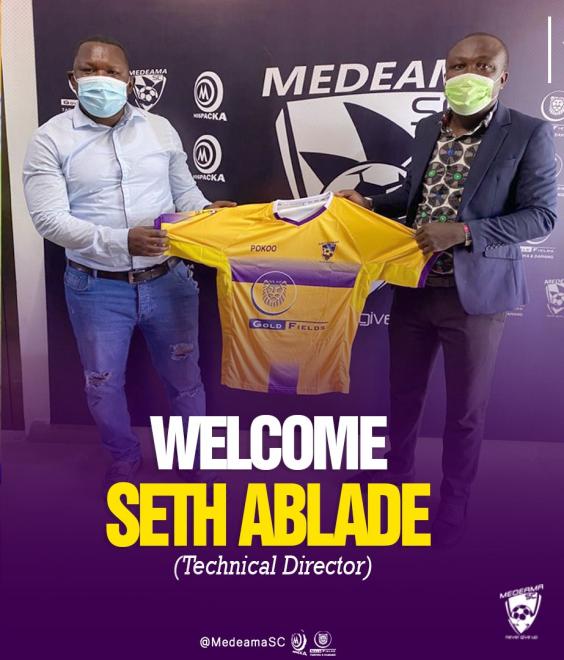 The 37-year-old has signed a three-year contract with the Mauve and Yellows to oversee the technical direction of the club.

He takes over the role which has become vacant since the departure of Augustine Evans Adotey in 2017.

READ ALSO:  Justice Blay does it again as Medeama beat Hearts of Oak

“We are extremely happy to have Seth on board and we are confident that he will help the technical direction of our club greatly,” Chief Executive James Essilfie told medeamasc.com

“He is ambitious, smart, and boasts of an incredible technical know-how which we believe will help to catapult the team to dizzy heights.

“The club is delighted to have him as the head of the technical department of our great club and we look forward to a long lasting and fulfilling working relationship.

Seth Ablade added “It’s a great honour to be here and I look forward to contributing my quota to the drive and ambition of this fantastic club.

“I have been impressed with what the club intends to achieve and I hope to work closely with my colleagues to ensure we bring success in Tarkwa.

“We are going for work together and hopeful that everything will turn out perfectly for all parties involved.”

Ablade, who was a member of the Ghana U17 team that finished 3rd in New Zealand 1999, arrived in Finland in 2004 and featured for clubs including KuPS and AC Oulu.

He is the father of Fulham FC youngster Terry Ablade.

He also holds a certificate in Science in Sports.