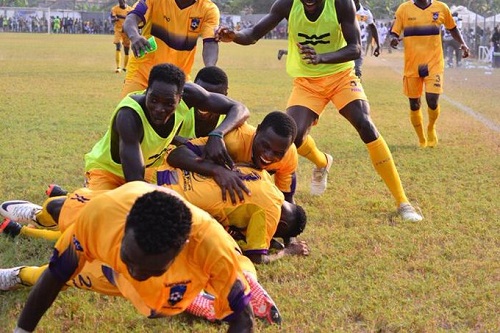 The club made the announcement today, March 18 on Twitter saying the players and the technical team have been handed a one-week break and will regroup in Tarkwa on March 25, 2020.

Players and the technical team have been handed a one-week break.

The squad will regroup in Tarkwa on March 25, 2020. #MEDSC pic.twitter.com/spibEz73VJ

They join other clubs which include Asante Kotoko, AshantiGold among others to break camp over Covid-19.

The President on Sunday banned all public gatherings including conferences, Sporting events, workshops, funerals, festivals, political rallies, church activities and other related events as part of measures to stop the spread of coronavirus in the country.

The GFA followed up shortly after with the suspension of 2019/2020 football season as part of measures to control the spread of the Coronavirus pandemic.

In a related development, theÂ Medeama SC have filed an appeal to fight the verdict from the Disciplinary Committee of the Ghana Football Association in the case they lost against Great Olympics.

Olympics on Monday were declared winners of their protest against league leaders Medeama SC in respect of their matchday 12 game played at the Akoon park in Tarkwa.

In a follow up on Tuesday, the club has confirmed that it has filed an appeal as it begins the process to ensure the final outcome is favourable for them.

â€œWe successfully filed an appeal on Tuesday against Ghana Premier League decision to dock us points over claims of fielding an unqualified player against Great Olympics.

â€œWe urge our fans to remain calm as we continue the legal battleâ€, a club statement on Twitter said.