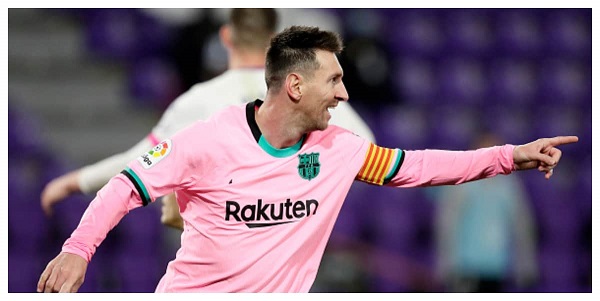 Barcelona's Lionel Messi has overtaken Brazil legend Pele to become the player to score the most goals for a single club after taking his tally to 644 on Tuesday.

The record-breaking goal came in the second half of Barca's 3-0 win at Valladolid, with Messi taking the ball in stride off a nifty flick from Pedri for a finish into the corner of the net.

Pele struck 643 competitive goals for Santos during an 18-year stay with the Brazilian club. He left for the New York Cosmos in 1975 and until Messi's goal, the record had stood ever since.

"When I started to play football, I never thought I would break any record. Especially not the record held by Pele that I now hold," Messi wrote on Instagram after Tuesday's game. "I can only give thanks to everyone that has helped me throughout the years, my teammates, my family, my friends and everyone that supports me every day."

Messi's Barcelona goals have been spread across 16 years in the club's first team. He scored his first professional goal in 2005 against Albacete as a 17-year-old.

Along with Ronaldo, who played for Manchester United before Madrid and Juve, Messi has taken goal scoring to new heights over the past decade. Everyone else in the top 10 has been retired for at least 40 years.

Messi reached his zenith in the 2011-12 season, Pep Guardiola's final year in charge of Barcelona, when he scored 73 goals in all competitions. That tally was sandwiched in between 53 the previous season and 60 the season after.

The Argentina forward has scored more than 50 goals in a season on six occasions, including 58 in 2014-15 when he won his second Treble as a Barca player.

However, it looked like Pele's record would be left to stand this past summer when Messi pushed for a move away from Barcelona after 20 years in Catalonia.

Messi believed a clause in his contract, which expires in 2021, allowed him to leave for free but eventually backed down when it became apparent the only way to try to invoke the clause would have involved a legal battle with the club.

If he had left, he would have done so having scored 634 goals for Barca's first team.

Instead, he ended up staying for at least one more season, which has allowed him to pass Pele's one-club record and continue making history.

In addition to his 644 goals with Barca's senior side, he scored 11 goals for the C team and the B team as a teenager.