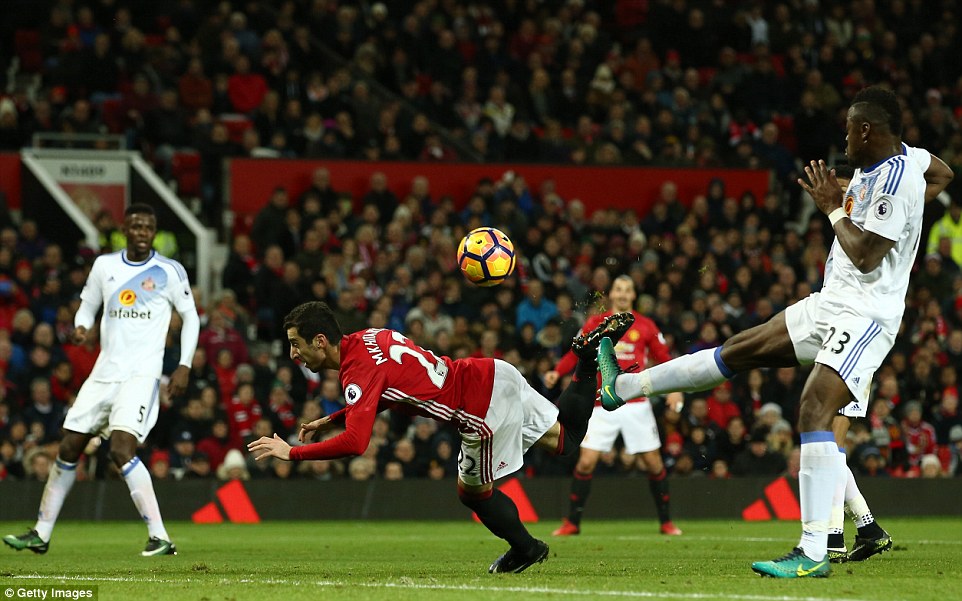 His days as The Chosen One have long since been consigned to the past, an unhappy chapter in the modern history of Manchester United, and David Moyes's first return to Old Trafford ended in more disappointment for the Scot as his Sunderland side suffered a Boxing Day defeat.

For Jose Mourinho, on the other hand, it was a fifth win a row as he continues to guide United in the right direction after three years of mediocrity under Moyes and Louis van Gaal since the departure of Sir Alex Ferguson.

It was far from straightforward. United were left hanging on to a rather precarious one-goal lead given to them by Daley Blind's first-half strike until the last eight minutes when goals from Zlatan Ibrahimovic and Henrikh Mkhitaryan, whose sensational finish should have been ruled out for offside, sealed victory.

Indeed, Moyes will have been heartened by the performance of his team for a significant part of this match as they played with confidence and no little enterprise. Their reward came too late from Fabio Borini's fabulous volley in the 90th minute.

But United are a different proposition than the one that declined under him, and Mourinho will take them into the New Year with renewed belief.

They kicked off the game outside the top-five at Christmas for only the second time in the Premier League era. The other occurred under Moyes in his only season in charge three years ago when United were two points worse off at the same stage of the campaign.

The Scot had a better win percentage than Mourinho, however, demonstrating that he is not alone in struggling to satisfy United's ambitions in the post-Ferguson years. Van Gaal hit one of his lowest points on Boxing Day last year when United were well beaten at Stoke, and Mourinho has struggled to stamp his mark on the club until recently.

He made two changes to the team that recorded a fourth win in a row at West Brom last week with Juan Mata and Blind replacing Wayne Rooney and Matteo Darmian. Rooney is said to have complained of a slight injury in training, denying him the chance to make his 450th Premier League appearance and, more importantly, equal Sir Bobby Charlton's all-time scoring record for the club.

There was the minimum of fuss surrounding Moyes's first return to Old Trafford since he was sacked in 2014. The Sunderland boss was last down the touchline before kick-off, receiving a handshake form Mourinho – and Fred the Red – but that was about it.

He will have been heartened by his team's performance in the opening 45 minutes even though Sunderland went in at half-time a goal behind to Blind's strike.

They started brightly at Old Trafford, and that was not always the case with Moyes' team when he was in charge here. Victor Anichebe, in particular, was a handful for United's defence despite needing lengthy treatment inside the opening 10 minutes after injuring his left shoulder in a collision with Phil Jones.

Patrick van Aanholt brought a fine diving save from David De Gea with a curling freekick from the edge of the box after Anichebe had been bundled to the ground by Blind, and De Gea then denied Anichebe when he swivelled to shoot from close-range after Blind had headed down to the edge of his own six-yard box under pressure from the Sunderland striker and Borini.

Even when United pressed, Sunderland poised a real threat on the break and Jermain Defoe flashed a shot wide of the upright after one such move in the 18th minute.

But there was a confident swagger about Mourinho's side as they moved the ball around quickly. United thought they should have been awarded a penalty when Antonio Valencia floated a pass into the path of Mata but the Spaniard was sent flying by a barge from Lamine Kone who did not appear to be even looking at the ball as it bounced through to Jordan Pickford.

The Sunderland goalkeeper then got a fingertip to Pogba's curling effort to turn it against the outside of his left-hand post, and United's record signing went close again with a dipping volley over the bar when Papy Djilobodji headed away Blind's cross to the edge of the box and Sebastian Larsson fluffed his clearance.

But United went ahead in the 39th minute when a fine passing move swept right to left where Ibrahimovic took possession on the edge of the box. He waited to slip the ball into Blind's path as he broke forward, and the Dutchman took over touch past Jason Denayer before drilling a shot into the bottom far corner.

Pogba almost extended United's lead within five minutes of the restart, meeting Ander Herrera's cross to guide a header just over from eight yards out, and Ibrahimovic had an even better chance but blazed over after being sent through by Mata.

Substitute Mkhitaryan also played in Ibrahimovic soon after replacing Jesse Lingard, but this time the striker's low effort was kept out by Pickford's outstretched right foot,

The Swede was not to be denied, however. When Pogba intercepted and broke forward in the 82nd minute, he fed Ibrahimovic who made no mistake this time as he curled the ball around Pickford.

Mkhitaryan soon made it three, although the Armenian was at least a yard offside when Herrera's cross arrived in the box behind him. Mkhitaryan improvised brilliantly, flicking a heel to guide the ball into the net, and Old Trafford erupted.

Sunderland had the last word when Marcos Rojo headed Denayer's cross to Borini 25 yards out and he sent a wonderful volley into the top corner. But this was Mourinho's day, and once again Moyes left disappointed. Mail Online