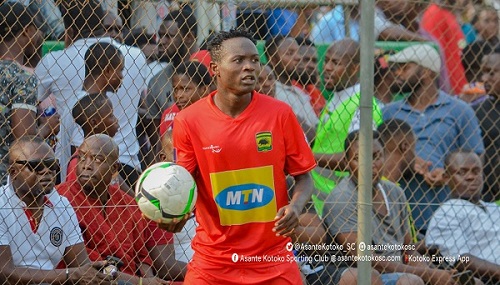 General Manager of Asante Kotoko Nana Gyambibi Coker has opened up on Christopher Nettey's transfer to the Porcupines.

Nettey, 21, has been one of the brightest spot in the Porcupines set up this season after joining on a loan deal from the lower-tier side.

He has made the right-back spot his own featuring in all of the Reds nine games in the on-going 2019/20 Ghana Premier League season.

According to reports, Attram has placed a price tag of $400,000 on the player which Kotoko believe it is too expensive to make the deal permanent.Â

â€œI donâ€™t believe Godwin Attram will say he transferred Nettey to Kotoko in dollars and we are saying the deal was in cedis, the negotiations were done between Kotoko and some group from Holland (some white men). We never negotiated a deal with Godwin Attram even though he is the one in charge of the team here in Ghana, everything was done in dollarsâ€

"At the beginning, they proposed a loan deal because they thought the boy had a deal outside so we should take him on loan and take 30 percent of the deal when heâ€™s transferred but we (Kotoko) rejected it and bargained, and the actual fee was reduced to $35,000 dollars"

Nettey aided Asante Kotoko to a 1-0 victory over Dreams FC at the Theatre of Dreams, Dawu. Due to his exceptional performance on the day, he was adjudged the man-of-the-match.