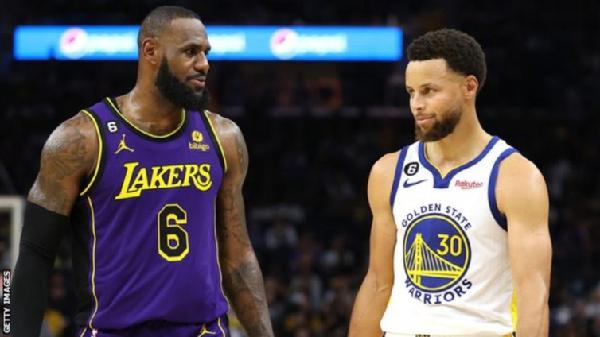 Stephen Curry scored 33 points as the Golden State Warriors began the defence of their NBA title with a 123-109 win over the Los Angeles Lakers.

The Warriors are aiming for a fifth title in the past nine seasons.

LeBron James, who hopes to surpass Kareem Abdul-Jabbar’s all-time points scoring record this season, finished with 31 points for the Lakers.

While the Warriors are favourites to retain the championship, they endured a turbulent off-season with head coach Steve Kerr describing a recent clash between Draymond Green and Jordan Poole as the “biggest crisis” he has faced during almost a decade in charge.

However, they ensured off-court issues did not affect the opening game of the season as they pulled away over the final three quarters to comfortably see off the Lakers in San Francisco.

After receiving diamond-encrusted rings in the pre-game ceremony, the Warriors were held to 25 points in the first quarter but hit 34, 32 and 32 in the final three periods as they outscored the Lakers 48-30 on three-pointers.

“The ceremony was an amazing celebration, to take time to reflect on what you accomplished, watching the banner go up, looking at the highlight tapes and all that,” said Curry.

“It’s really hard to turn the page and go and play a game of basketball, but we figured how to do it. Now we can look forward to the rest of the year.”

Klay Thompson finished the game with 18 points for the champions, Poole notched 12 points and seven assists off the bench while Curry also managed seven assists, six rebounds and four steals.

Despite James’ 31-point haul, the Lakers – who missed out on the 2022 play-offs after a disappointing campaign – opened the season with defeat for the sixth year in a row.

During the ring ceremony, Curry made an impassioned speech in support of WNBA star Brittney Griner, who in August was sentenced to nine years in prison by a Russian court on drug charges.

Eight-time WNBA All-Star Griner was detained in February at an airport near Moscow when vape cartridges containing cannabis oil were found in her luggage.

“We want to continue to use our platform and the opportunity to shout out a very special member of the basketball community. Brittney Griner’s birthday is today, she’s 32,” said Curry.

“We want to continue to let her name be known and we pray. It’s been 243 days since she was wrongfully incarcerated in Russia.

“We hope that she comes home soon, that everybody’s doing their part to get her home.”

Celtics start strongly
Elsewhere, Jayson Tatum and Jaylen Brown each hit 35 points as the Boston Celtics opened the season with a 126-117 win over the Philadelphia 76ers.