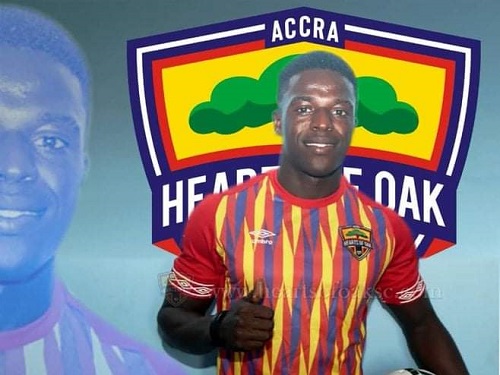 Newly signed Accra Hearts of Oak player, Isaac Mensah has joined is his teammates for the preseason training as his club gears up for the start of the 2020/21 Ghana Premier League.

The forward has started training with his new colleagues as he aims to form an integral part of Coach Edward Odoom's side for the upcoming season.

Mensah was signed from Division One side Nkoranza Warriors on a three-year deal and is willing to fight for a place in the side after having a good season with the lower tier side in the cancelled season of 2019-20.

He scored nine goals for Warriors in the Division One league (Zone One) before the season was cancelled due to the outbreak of the coronavirus pandemic.

And, the striker hopes to carry on from where he left off in the lower league after making the big leap to join the capital club.

"This is an opportunity for me to take my career to the next level and, I am determined to make the most of this opportunity", Mensah told Hearts Media.

"I am happy to have finally joined my teammates for the first time after being held up by the outbreak of Covid-19 which prevented us from meeting as we had to stay at home until the green light was given".

"Everybody wants to catch the eye of the technical team and, the same applies to me. I will keep working hard for myself and the team as we aim to win the league title at the end of the season.

"I want to play a part in the success story of this football club and, I will be extremely happy if we win the title next season," he concluded.

The Ghana Football Association has announced that the 2020/21 Ghana Premier League will commence on November 13.