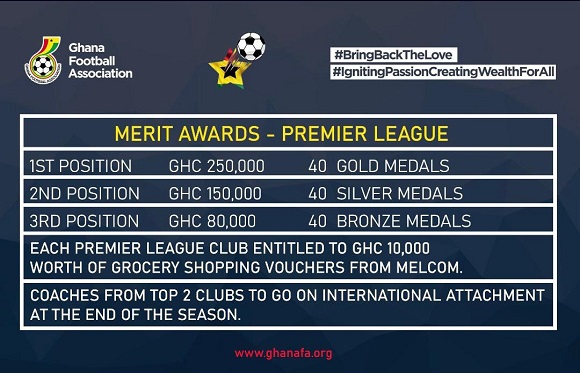 There has been a major controversy on how much the winner of the 2020/21 Ghana Premier League (GPL) will take home as prize money.

The GFA President Kurt Okraku last week at the launch of the 2020/21 football season said the winner of this season's league takes home a trophy plus cash prize of GHC 250,000, 40 gold medals plus Ghc 10,000 worth of groceries from Melcom Shopping Center.

He added that the runners up will receive GHC 150,000, 40 silver medals plus groceries from Melcom Shopping Center and the third place will pocket GHC 80,000 plus 40 bronze medals.

The prize money is an increase from the GHc 180,000 received by the last winner of the Ghana Premier League Aduana Stars in the 2016/17 season.

Despite the increase in amount, several backlashes have been aimed at the country's football governing body as some believe the amount when compared to other leagues, is too small.

But reacting to the matter,  GFA's General Secretary Prosper Harrison Addo maintained that 'No amount will be enough' for GPL  winner.

"... indeed if even there is no prize money there is a trophy and ticket to Africa at stake. No amount will be enough, take it from me. There prize money of the league is not to take care of everthing, nobody is saying it can cater for that," as reported by 3FM.

"You look at economic parity and our prize money is bigger and also lower than other football leagues."

"We go into this comparison of comparing the Ghana Premier League with South Africa. We cannot go and compare everything with every country. The cost is to improve all the clubs. This year this is the prize money we are giving."

The 2020/21 Ghana Premier League is set to kick off on 14 November with a top liner between Aduana Stars and Hearts of Oak at the Nana Agyeman Badu Park at Dormaa at 3:00 pm.