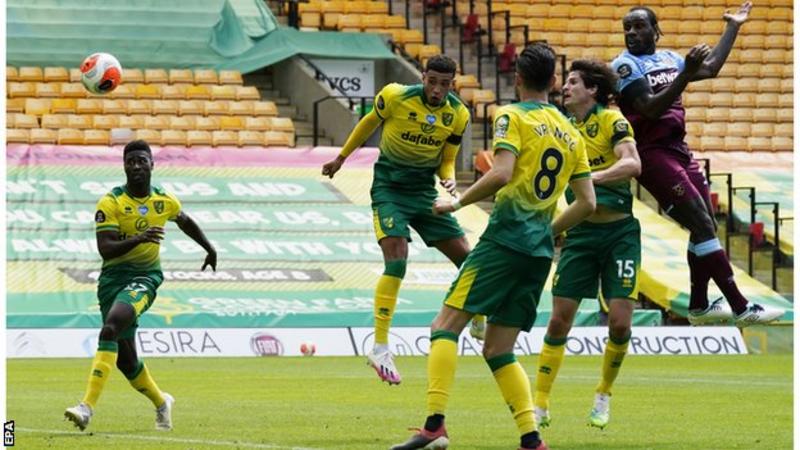 Norwich City became the first club to be relegated from the Premier League this season as Michail Antonio scored all four goals to ease West Ham's troubles near the bottom of the table.

A seventh successive league defeat left Daniel Farke's side anchored at the foot of the table, 13 points from safety with only three games - and a maximum nine points - to play.

Having struggled to adapt since winning the Championship last season, Norwich's third relegation in seven seasons was sealed by Antonio's superb performance in front of goal.

The forward volleyed the first from inside the six-yard area after Issa Diop's flick from a corner before using his head to guide Mark Noble's free-kick beyond Tim Krul.

Hammers skipper Noble also provided the ball over the top for Antonio's hat-trick. Krul saved his initial shot but it fell invitingly for the West Ham player to head over the line. His fourth was a tap-in after Ryan Fredericks' pass.

West Ham's first Premier League away win under David Moyes lifts them six points above the relegation zone, with two of their remaining three matches at home to fellow strugglers Watford and Aston Villa.

Their 24th league defeat came after an abject performance, the Canaries failing to score for a league-high 17th game this season.

Argentine midfielder Emiliano Buendia tested Lukasz Fabianski while Teemu Pukki, who has not scored since netting his 11th league goal of the season on 22 January, headed a good chance wide.

What went wrong for the Canaries?
There were emotional scenes at Carrow Road when referee Kevin Friend signalled the end of the match.

A number of Norwich players dropped to the ground while boss Farke consoled his team.

Having spent the majority of this prolonged campaign in the bottom three, the end of the season cannot come soon enough.

The Canaries depart England's top flight having caused one of the biggest shocks of the season, a 3-2 win over defending champions Manchester City, while Farke's side also held Arsenal and Tottenham at home, and won at Everton.

When Jamal Lewis hit the winner against Champions League hopefuls Leicester on 28 February, shortly before the season was suspended because of the coronavirus pandemic, Norwich were just four points from safety with 10 games remaining.

But they have been woeful since the restart, losing all six league games by an aggregate score of 15-1.

Farke opted to keep the core of last season's team that finished with five more points than Sheffield United on the way to winning the Championship in impressive style.

Nine of the 11 players that started against West Ham also started the final Championship game of last season against Villa.

While Villa spent more than £100m after winning promotion via the play-offs, Norwich spent a fraction of that sum, with £750,000 for West Ham right-back Sam Byram one of the biggest outlays.

And they have paid the price for naive defending and a toothless attack.

They have managed just five clean sheets and scored only seven times away from Carrow Road.

With two of their three remaining games at third-placed Chelsea and second-placed Manchester City, they are on course to finish the season with the fewest away goals in the Premier League era.

What now for Farke and his players?
Farke insists Norwich will not do anything "crazy" in the transfer market as they look to bounce back in 2020-21 - but there are some important decisions that have to be made.

The former Borussia Dortmund reserve-team boss has a contract until 2022 and is keen to stay and rebuild a team capable of making an immediate return to the Premier League.

Whether Farke will be in charge after a dreadful run of form remains to be seen, while Norwich's hierarchy has some tough choices to make concerning the future of the club's playing assets.

That was before the season was suspended, Norwich warning in April that they could lose up to £35m because of the coronavirus pandemic.

It may prompt Norwich to cash in on highly-rated young players like Ben Godfrey and Todd Cantwell, although Farke stated on the eve of the West Ham game: "If we want to bounce back next season it is important we keep our best players to be competitive."

Defender Godfrey, 22, has been linked with German teams Borussia Dortmund and RB Leipzig, while Sheffield United are reported to be interested in 22-year-old midfielder Cantwell.