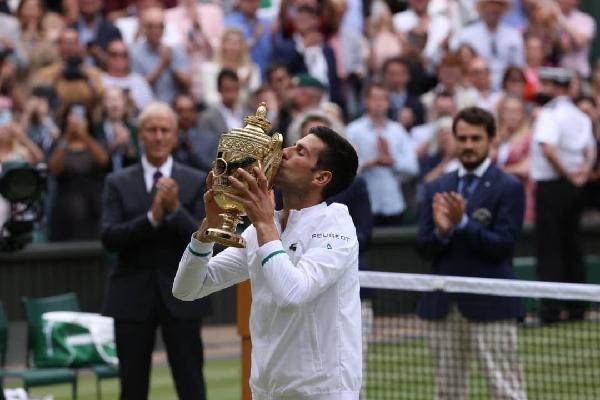 Seventh seed Berrettini, 25, received loud backing but could not maintain his advantage in his first major final.

"Winning Wimbledon was always the biggest dream for me when I was a kid," said the world number one, who dropped a set for only the second time in the SW19 fortnight.

"A seven-year-old boy in Serbia constructing a Wimbledon trophy with improvised materials and standing here with a sixth real trophy is incredible. It is amazing."

Having already claimed the Australian Open and French Open, Djokovic is the fifth man in history - and only the second in the Open era after Rod Laver in 1969 - to win the first three majors of the season.

And with Djokovic retaining his crown at the All England Club, he has moved a step closer to becoming the second player to achieve a 'Golden Slam'.

Only Germany's Steffi Graf in 1988 has ever won all four majors and the Olympics in a calendar year.

Berrettini saved two match points at 5-3 in the fourth set with a controlled volley and a 101mph forehand winner down the line. But the Italian could not fight off the third as he sliced a backhand into the net.

Djokovic fell flat on his back with his arms outstretched after sealing a hard-fought victory, while Berrettini's contrasting emotions on the opposite baseline - bending over double with his hands on his knees - illustrated the effort he had expended in defeat.

After taking the acclaim of a rapturous Centre Court crowd, Djokovic climbed up to his support team to celebrate before finding a few spare seconds to have a selfie with one young fan.

'The journey is not stopping here,' vows Djokovic
Djokovic has made no secret of the fact he is motivated by creating history, having already spent more weeks as world number one than any other man and now targeting the most major titles.

When Djokovic won his first major at the 2008 Australian Open, Federer - who is almost six years older than the Serb - had claimed 12 of his 20 majors. Djokovic was still stuck on one when Federer claimed his 16th in 2010.

Now, Djokovic has moved level with Federer - and Nadal, who caught up with the Swiss at last year's French Open - for the first time.

"I have to pay tribute to Rafa and Roger. They are legends of our sport and the two greatest players I have faced," said Djokovic, who won his second Grand Slam in 2011 and has now won a total of 19 in the past decade.

"They are the reason [why I am] where I am today. They made me realise what I had to do to get stronger - mentally, physically and tactically.

"The last 10 years have been an incredible journey that is not stopping here."

'Djokovic has taken tennis to another level' - Reaction
Former British number one Tim Henman on BBC TV: "It has really been a fantastic tournament with a very worthy winner. Djokovic had an incredible tournament, he came in as a huge favourite and he put in an absolute masterclass in the two weeks. No doubt the best player won this tournament.

"He talks about his hunger, desire and motivation but there is no doubt he want to be the leader of that conversation when it comes to numbers of Grand Slams. The calendar Grand Slam is absolutely on the cards and is one of the greatest achievements in the sport. After the challenges of 2020 to have the players back in the stadium - it's a great way to finish."

Former Wimbledon champion Marion Bartoli on BBC Radio 5 Live: "It is entirely sensational that Novak has been able to win the 20th Grand Slam. What a final - we have been so lucky to witness such a great level from both players. Berrettini pushed Djokovic - it takes two players to have such a great fight. Novak Djokovic has just taken tennis to another level."

Six-time Grand Slam champion Boris Becker on BBC TV: "It has been a difficult three weeks, just playing and being in the hotel, you need great people around you on your side and it's great for Novak to show his appreciation for his team."