Medeama coach Boadu returns to the dugout against Great Olympics 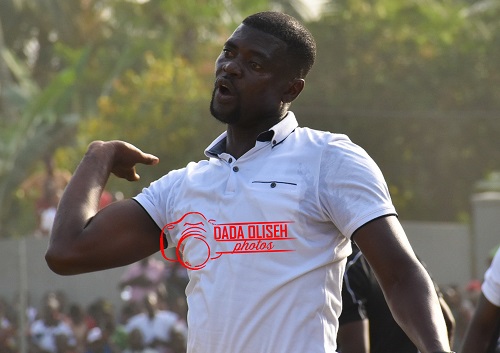 Medeama SC head coach Samuel Boadu will be in the dugout when they take on Great Olympics this afternoon, the club have announced.

The gaffer has been missing in action in the club's last 3 matches due to 'health reasons.' In hisÂ absence assistant coach, Hamza Obeng took charge of the team winning two and losing a game in all competitions.

However, the club have revealed that Boadu will be making a return to the dugout as they take on Great Olympics at the Akoon Park, Tarkwa on Monday, March 3 at 3:00 pm.

Samuel Boadu has been given-all clear to return to the pitch for our Premier League match against Great Olympics on Monday.

The gaffer has been on medical break and missed the sideâ€™s last three matches.

He was absent as the Mauve and Yellows lost 2-1 at home to Elmina Sharks and also missed the sideâ€™s 2-1 win at Inter Allies.

Coach Boadu also missed the 1-0 win over Karela United to advance to the Round of 32 of the MTN FA Cup.

In his absence assistant coach Hamza Obeng has grind the wheel impressively, recording two successive wins in the process.

However, the boss returns to the touchline for the crunch Premier League match against Great Olympics at the Akoon Park in Tarkwa.

A win for the two-time FA Cup holders, will see them move top of the Ghana Premier League table.