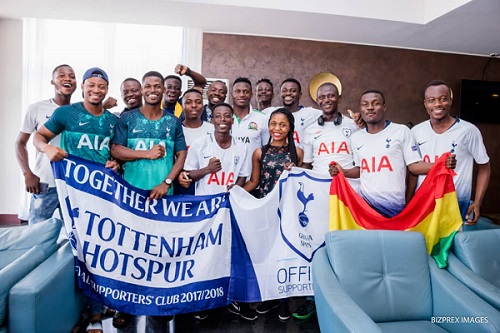 A delegation from Ghana Spurs, an official supporters club wing of Tottenham Hotspur paid a courtesy call on Victor Wanyama, a footballer with the English club at the La Palm Royal Beach Hotel in Accra on Sunday, March 24, 2019.

This follows Kenya's 1-0 loss to the Black Stars of Ghana in the 2019 AFCON qualifier game on Saturday, March 23, 2019, at the Accra Sports stadium.

The "Victor Wanyama spaghetti lyrically spiced" chants welcomed the Spurs player as he approached the group.

Chairman of the Supporters Club Eric Matey in his opening address said the delegation was delighted to meet one of their own.

"We are excited to meet you as a group Victor, and I want to take this opportunity as the Chairman for Ghana Spurs Supporters Club to officially welcome you to Ghana."

The group lauded the Kenyan for his belter and goal of the season hit against Liverpool in a thrilling 2-2 draw away at Anfield last term and urged him to replicate the audacious hit against same opponents on Sunday, on their patch.

The delegation finally encouraged Wanyama to fight for his place in the Spurs starting line after his recent bench warming spells and notably a recurring knee problem he suffered which ruled him out for 3 months on the sidelines hence failing to command a starting berth.

They took turns to take photographs with the combative Spurs midfielder as well as a group photo.