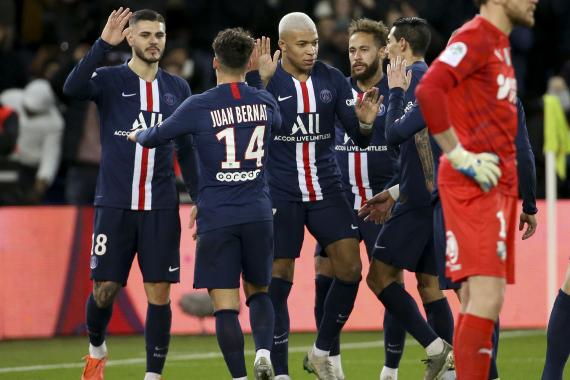 President Nasser Al-Khelaifi has vowed Paris Saint-Germain will pursue their UEFA Champions League campaign despite football being postponed in France until September.

The club are ready to play their 'home' matches in other countries, said Al-Khelaifi, with PSG waiting to learn who they will face in the quarter-finals of the competition.

Victory over Borussia Dortmund in the last 16 carried Thomas Tuchel's side through to the last eight; however, the coronavirus pandemic has seen sport grind to a halt in France

French prime minister Edouard Philippe announced in a speech to the National Assembly on Wednesday (AEST) that there will be no professional football before September, which means the domestic season looks to be over.

"We respect the decision of the French government," Al-Khelaifi said in a statement reported byÂ L'Equipe.

"With agreement of UEFA, we intend to take part in the final phase of the Champions League in the places and dates where it will be organised.

"If it isn't possible to play in France, we will play our matches abroad and we will make sure of the best conditions of health security for our players and all our staff."

As of Wednesday, it remained to be seen how the government ruling would affect Ligue 1 in terms of final placings for the 2019-20 season.

PSG led the table by 12 points from second-placed Marseille when football was put on pause in March.