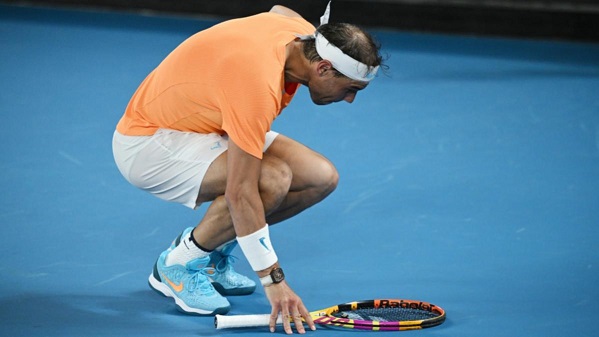 World number two Rafa Nadal will be sidelined for six to eight weeks by the hip flexor injury he suffered during his second-round loss at the Australian Open, the Spaniard's team said on Thursday.

Nadal's title defence ended bitterly on Wednesday as he slumped to a 6-4 6-4 7-5 defeat by Mackenzie McDonald, the latest chapter in a long history of fitness problems at Melbourne Park.

The 36-year-old had an MRI scan on his left leg in Melbourne on Thursday, which revealed a grade 2 injury in the Illiopsoas, the primary hip flexor.

"He will be resting the next days once back in Spain and will start with anti-inflammatory physiotherapy," his team said in a statement.

"The normal time estimated for a complete recuperation is between six and eight weeks."

The 22-times Grand Slam champion arrived in Melbourne with only one win to his name since the U.S. Open after rib, abdomen and foot injuries kept him off court for much of last season after Wimbledon.

"I mean, hopefully it's nothing too bad. In the end (it has) been three positive weeks in terms of practice," he told reporters after his defeat.

"So I really hope that (injury) doesn't put me out of the court for a long time, because then it's tough to make all the recovery again.

"It's not only the recovery. It's all the amount of work that you need to put together to come back at a decent level."

A six to eight week recuperation would allow Nadal to return well before the clay court season and the run-up to the defence of his French Open title in late May and early June.