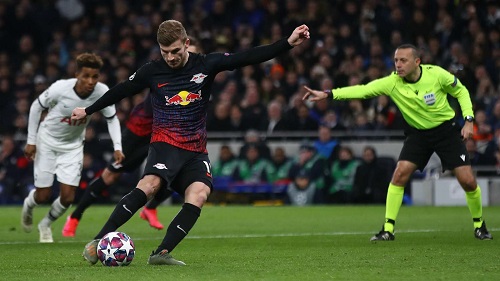 TheÂ BundesligaÂ title-chasers spurned chance after chance, including three big opportunities in the opening 90 seconds, before Werner's penalty - his 26th goal of the season - early in the second half brought them a 1-0 victory.

Hamstrung by the absence of the injuredÂ Harry Kane and Son Heung-min, Tottenham had little bite in attack, with Lucas Moura ineffective in the central role, but they have a gem inÂ Giovani Lo Celso who twice went close to an equaliser that would have flattered the hosts.

Tottenham's hopes of another run to the Champions League final look bleak, but Jose Mourinho must know his team could have been effectively out of this tie already ahead of the March 10 second leg in Leipzig.

Patrick Schick shot a yard wide, Angelino rattled the near post from a tight angle on the left, and Werner should have stuck away a close-range chance inside the first minute and a half of a blistering start from Leipzig.

At the other end,Â Peter Gulacsi had to stretch to turn away a curling shot fromÂ Steven Bergwijn that was heading for the bottom right corner.

Schick then headed no more than a foot wide from a corner as Tottenham, with their defenceÂ a nervy rabble, again came under siege.Â Memories came flooding back of their last encounter with German opposition at the Tottenham Hotspur Stadium, a 7-2 unpickingÂ byÂ Bayern MunichÂ in October.

Werner had a glorious chance in the 35th minute after being slipped in to the left of goal, but theÂ GermanyÂ internationalÂ proddedÂ straight at Lloris.

Leipzig finally had an opportunity they surely would not spurn in the 56th minute when Ben Davies hacked down Konrad Laimer, and this time the prolific Werner beat Lloris, his skidding penalty finding the bottom-left corner.

Gulasci made another fine stop to keep out a free-kick from Lo Celso, who was Tottenham's most impressive outfield player by a distance, before Lucas headed over a glaring late chance.

The Premier League side got what they deserved though. And on a night when he becameÂ the youngest ever boss to lead a team in a Champions League knockout match,Â at the age of 32 years andÂ 211 days, Leipzig boss JulianÂ Nagelsmann saw his give themselves a great change of progressing.

Atalanta's fairytale Champions League debut campaign looks set to continue into the quarter-finals after they thumped Valencia to take a commanding lead into the second leg of the last-16 tie.

Hans Hateboer, with two, Josip Ilicic and a wonder-strike from Remo Freuler saw off the two-time finalists, who were shell-shocked by the pace of their opponents in attack and their incisiveness. There is surely no way back for Albert Celades' Spanish side.