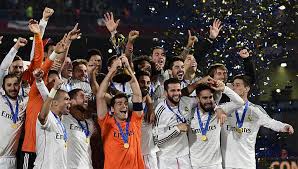 When it matters most, the big boys show up. As Cristiano Ronaldo was inspirational and ensured that Real Madrid won the Club World Cup title after battling it out with resolute Kashima Anthlers.

Real Madrid suffered an almighty fright before a Cristiano Ronaldo hat-trick hauled them back from 2-1 down and gave them a 4-2 win over Kashima Antlers in the Club World Cup final in Yokohama on Sunday.

Two goals from Gaku Shibasaki stunned the European champions as the Japanese hosts took the lead early in the second half before a Ronaldo penalty brought Real level on the hour. The 11-times European champions then survived several more scares and a possible sending-off for their captain, Sergio Ramos, before Ronaldo scored twice more in the first period of extra-time.

Real, who won the tournament for the second time in three years, appeared set for an easy victory when Karim Benzema gave them a ninth-minute lead but Shibasaki changed the story by levelling one minute before half-time.

Kashima were the first Asian team to reach the final although they qualified for the tournament as champions of host nation Japan. The Asian champions Jeonbuk Motors had lost in the quarter-finals.

Real went ahead when Luka Modric’s volley was parried by Hitoshi Sogahata and Benzema tapped in the rebound. Kashima refused to be overawed, continued playing their neat football and snatched a shock equaliser just before the break.