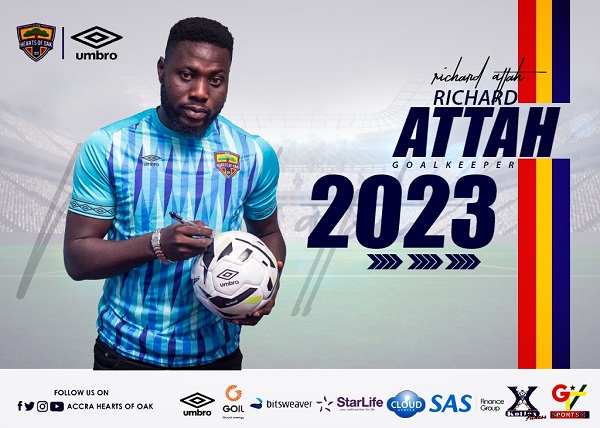 Hearts of Oak and goalkeeper Richard Attah have agreed terms extending the player’s stay at the club.

The Ghana Premier League giants have extended their goalkeeper's contract until 2025.

This comes after his splendid the goalkeeper's splendid performance in the truncated 2019/20 Ghana Premier League campaign. His performances for the Phobians led to him being crowned Hearts of Oak Player of the Month for February by the supporters.

He as well earned his debut call-up to the senior national team, the Black Stars in March.

The Accra based club on Tuesday confirmed that they have tied down the former Elmina Sharks goalkeeper.

"Hearts Of Oak is happy to announce that goalkeeper Richard Attah has extended his contract to 2023."

📸 | @HeartsOfOakGH is happy to announce that goalkeeper Richard Attah has extended his contract to 2023.

Hearts of Oak last year bolstered their goalkeeping department with the signing of Richard Attah. He joined on a free transfer after leaving fellow top-flight side Elmina Sharks where he was a dependable pair of hands.

The shot-stopper was outstanding for his former club Elimina Sharks as he kept eight clean sheets in 11 matches in the GFA Normalization Committee Special Competition.