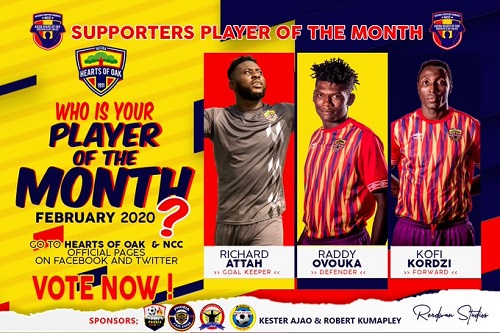 The trio will be competing for an individual award in 2020 after Hearts of Oak announced their nomination for the best player of the month for February.Â

The three players were instrumental for the Phobians during the month as they helped the club move to 9th on the league table with 16 points, 5 points adrift leaders Ashanti Gold SC.

Goalkeeper Attah was impressive in the post keeping a number of clean sheets and rescuing his side on a number of occasions with some fantastic saves.

Ovouka who has displaced William Dankyi at left-back has emerged as one of the standout players of the season.

Kordzi is currently the club's top scorer with four goals.

The winner willÂ become the second person to scoop the prestigious award after Emmanuel Nettey triumph in January.

🗳 | Vote for @HeartsOfOakGH’s best player for the month of February