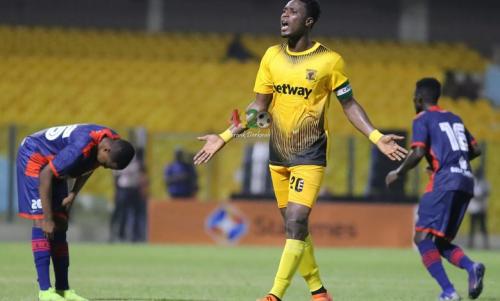 AshantiGold Chief Executive Officer Emmanuel Frimpong has confirmed that striker Shafiu Mumuni in no longer in the plans of the club.

The striker has been on loggerheads with the club for some time now with regard to signing a new contract following the expiration of his deal.

The Miners coach Roberto Landi who is not in the country due to the border closure but has said that with the videos he has watched about the 2019 WAFU top scorer he does not fit in his plans.

“Shafiu is not in our plans. The head coach claimed Shafiu is not needed in the team because we have signed his replacement. His contract has ended.”

"He said his videos he has watched so far he will not fit in his plans,"  Emmanuel Frimpong told Ashh FM.

AshantiGold have beefed up their team with new additions ahead of the competition. They have signed 2016 MTN FA Cup best player Yaw Anorl from Bechem United and 2016/17 Ghana Premier League top scorer Hans Kwofie has rejoined the club.

Meanwhile, the club is in talks with Latif Anabila, Appiah McCarthy and James Akaminko to renew their contracts.

Emmanuel Frimpong says his outfit is 85% ready to compete in the CAF Confederation Cup.