Son Heung-min out for 'number of weeks' with broken arm 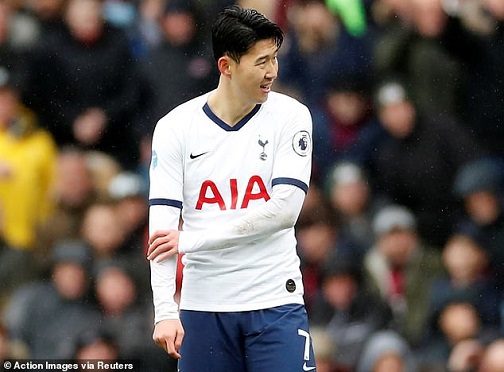 TottenhamÂ forward Son Heung-min could be out for 'months' after breaking his arm in the first minute of Sunday's win against Aston Villa.Â

Spurs confirmed the news on Tuesday of the injury to Son's right elbow which means he will be sidelined for at least 'a number of weeks', but theÂ Evening StandardÂ report the forward could be out for two months.Â Â Â

The injury means he will definitely miss the Champions League first-leg against Red Bull Leipzig on Wednesday, as well as the Premier League clash at Chelsea on Saturday.Â

It is a killer blow for Tottenham boss Jose Mourinho, who is already without Harry Kane until at least April.

'So we'll miss him, according to Simon, for a number of weeks.'Â

Mourinho has already hinted Kane, who has injured his hamstring, could miss the rest of the season.Â

Son did receive treatment on the injury,Â which was caused after a heavy tackle by Aston Villa defender Ezri Konsa, on the pitch in the early stages at Villa Park, but played the full 90 minutes and remarkably scored twice, including a last-minute winner.Â

If the injury puts him out of action for two months, he could miss up to 13 Tottenham games in total.Â

He will reportedly return to South Korea for the surgery, after which a more accurate timescale will be known.Â Â

The injury comes during a busy period for Spurs, who are set to play Red Bull Leipzig in the Champions League last-16 on Wednesday.

They then travel to rivals Chelsea on Saturday in the Premier League, before they host Wolves on March 1 and Norwich in the FA Cup fifth round three days later â€“ Son will miss all of these games.Â Â