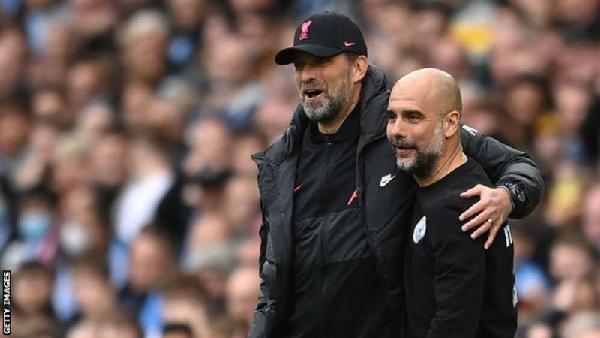 Will Manchester City or Liverpool be champions? Can Tottenham seal a Champions League spot ahead of north London rivals Arsenal? Which of Burnley or Leeds are heading for the Championship?

These are the main questions to be answered on what promises to be a dramatic and emotional final day of the 2021-22 Premier League season.

It is the first time in 10 years that the title, top four and relegation are all still to be fully decided before the final day.

We take a detailed look at everything at stake on what promises to be a gripping and tense finale. 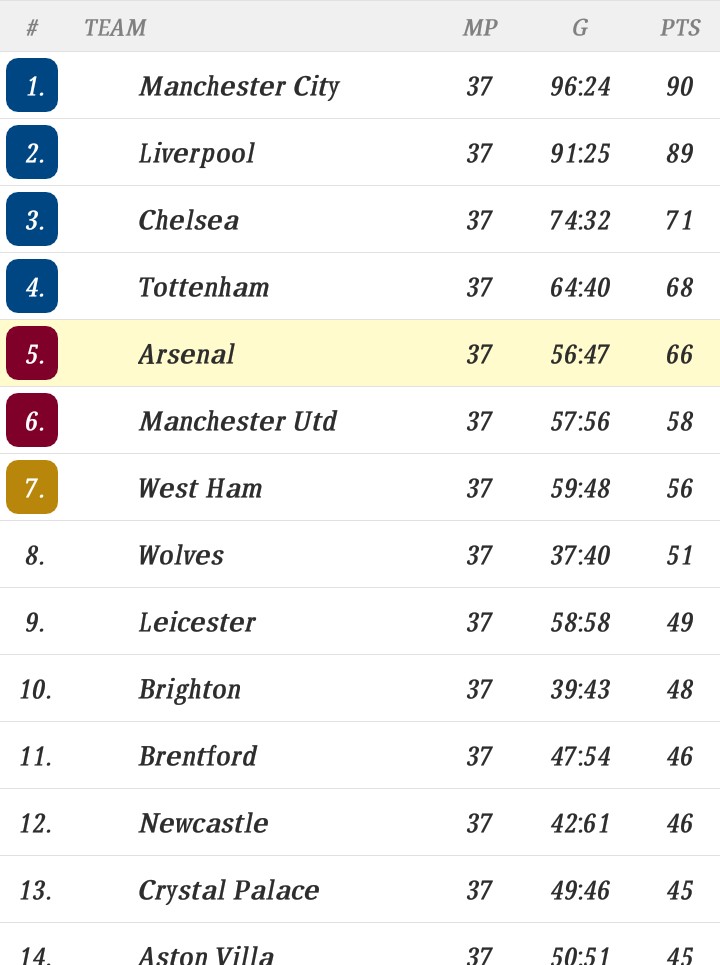 Manchester City hold a one-point advantage at the top of the table after their draw at West Ham and Liverpool's victory at Southampton in the penultimate round of games.

Few people expect the defending champions to surrender their lead, and not just because no side has ever started a Premier League final day top and not ended it there.

The main reason is that City have been simply superb this season, winning 28 games to stay out in front despite Liverpool clawing back what was at one stage a double-digit lead.

Claiming the league crown would put some salve on the wounds inflicted on City in the latter stages of this season by the Reds, who beat them in the FA Cup semi-final, and Real Madrid, who stunned them with a late comeback in the Champions League last four.

It would also deny Jurgen Klopp's side a shot at a historic quadruple, with the Carabao and FA Cups already in the Anfield trophy cabinet and the Champions League final to come.

All Liverpool can do is beat Wolves at home and hope Villa can do them a favour at the Etihad, with a draw no good for them because of their goal difference, even if City lose.

This season is the third time in four campaigns that the pair have claimed the top two spots. If they match each other's result on Sunday, it will be the second time, after 2018-19's gripping race, that they have been separated at the top by just a point.

Spurs are often mocked for doing things described as 'Spursy' - meaning throwing away leads and grasping defeat from the jaws of victory.

It would take something especially 'Spursy' for them to miss out on a Champions League spot this season.

Their hard-fought win over Burnley on Sunday, followed by Arsenal's deserved defeat at Newcastle the following day, means Tottenham go into the final day two points ahead of their fierce rivals.

With their vastly superior goal difference, Antonio Conte's side can afford a draw at relegated Norwich.

Only a win will do for Arsenal, who are at home to an Everton side now assured of Premier League football next season. If the Canaries can provide a dead cat bounce at Carrow Road and beat Spurs, a win will see the Gunners nick it.

There is also an outstanding European issue still to be settled a bit lower down the table, as Manchester United and West Ham fight it out on Sunday to decide who will be playing in the Europa League and who in the Europa Conference League.

The sixth-placed Red Devils can end a disappointing season by sealing a Europa League spot with a win at Crystal Palace. Anything less, though, leaves the door open for the Hammers, who trail by two points in seventh but have a vastly superior goal difference.

David Moyes' side are at Brighton on Sunday, hoping to get another shot at a competition in which they reached the semi-finals this season.

Below this there will be the usual jockeying for league placings on the final day, with each place higher in the division worth an estimated extra £3m.

For a club like Aston Villa, for example, it could mean an extra £12m if they can lift themselves from 14th to 10th on the final day.

Burnley or Leeds for the drop? 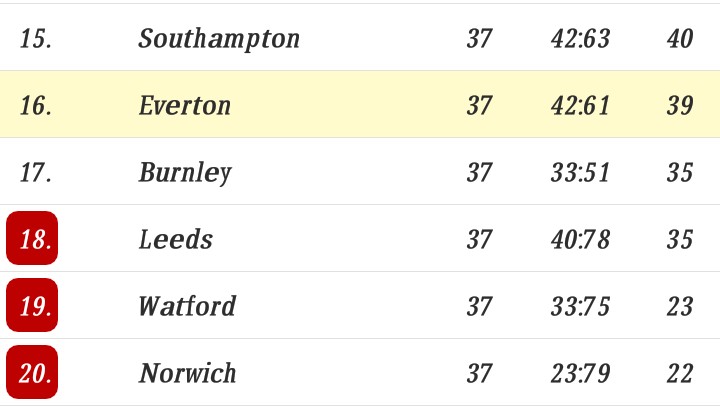 At half-time at Goodison Park on Thursday, it looked as though three sides would be battling it out to avoid joining Watford and Norwich in the Championship next season.

But Everton's remarkable comeback win over Crystal Palace leaves Burnley and Leeds to duke it out for survival on the final day.

The pair are level on 35 points but the Clarets have the edge courtesy of a vastly superior goal difference, meaning they only need to match Leeds' result on the final day to stay up.

Mike Jackson's side also have home advantage on Sunday, albeit against an in-form Newcastle side hoping to seal a top-half finish.

Golden boot, gloves and the rest 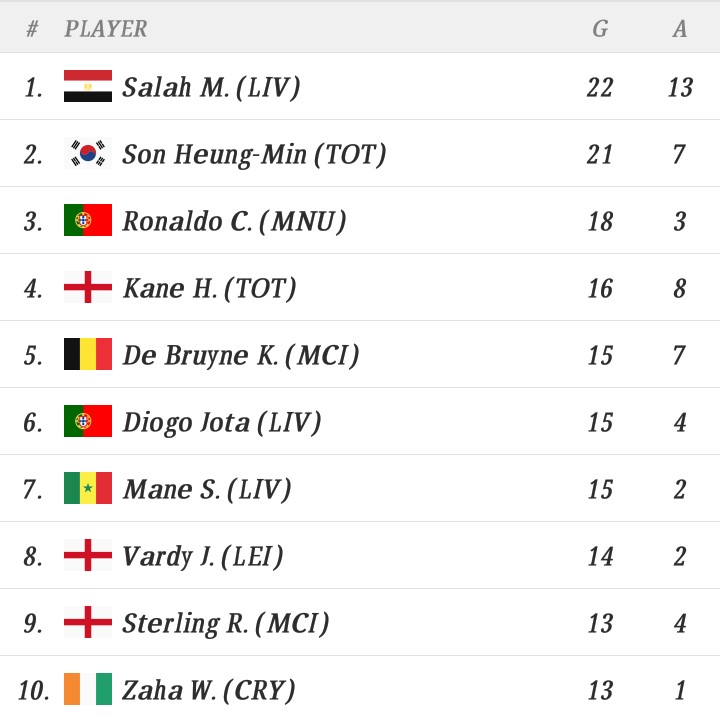 Manchester City and Liverpool are not just battling it out for the title - their respective goalkeepers are also locked in a tussle for the division's golden gloves.

City's Ederson and Liverpool's Alisson both have 20 clean sheets to their name.

There is a very close race taking place at the top of the Premier League goalscorers charts too, with Liverpool's Mohamed Salah currently one ahead of Tottenham's Son Heung-min.

With 18 goals to his name, it would take something truly special for Cristiano Ronaldo to muscle his way in, although the Portuguese has been performing remarkable goalscoring feats for much of his career.

Speaking of Ronaldo, could Sunday be the final time we see him in Premier League action?

The summer arrival of Erik ten Hag as Manchester United's new boss is expected to mean a major overhaul at the club, with speculation that the 37-year-old could be one of those moved on.

One player who will definitely be saying farewell to his club's fans is Chelsea defender Antonio Rudiger, who has agreed to join Real Madrid this summer.

The West Ham fans at Brighton's Amex Stadium will be seeing the last of the retiring Mark Noble and the soon-to-be-out-of-contract Andriy Yarmolenko in a Hammers shirt.

Will Sunday be the last Arsenal appearance of Alexandre Lacazette and Eddie Nketiah? Could Christian Eriksen be saying 'thank you and goodbye' to Brentford? Will cult hero Divock Origi get a last run-out at Liverpool?

Potential answers to these questions and more will be provided on what promises to be a gripping Premier League 2021-22 finale.