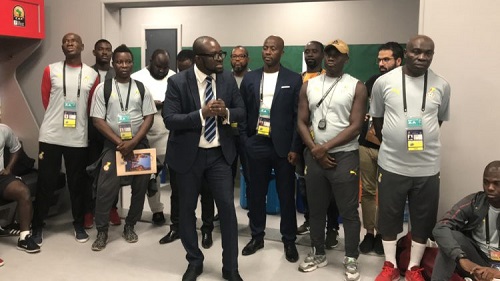 GFA President Kurt E.S has charged the Black Meteors to lift themselves up and fight for a ticket to the 2020 Olympic Games on Friday.

The National U23 side were unable to secure a ticket to the Olympic Games on Tuesday after losing on penalties to Côte D’Ivoire in their U23 AFCON semi- final match played at the Cairo Stadium.

Coach Ibrahim Tanko’s side will now have to beat South Africa in the third place playoff on Friday to grab the final ticket to represent Africa at the Olympic Games.

After Tuesday’s painful defeat, the GFA president was at the team’s hotel to inspire and reassure the players that all hope is not lost and urged them to psyche themselves for the final battle on Friday.

“This match is gone let’s focus on the next match on Friday and our next opponents. All hope is not lost”.

“Our ambition is to qualify to the Olympics if we fight like we did in the second half (against Côte D’Ivoire) we will make it to the Olympics”, the Ghana FA boss stayed at the team’s hotel on Tuesday evening.

He implored the players to remain positive ahead of the third place play off.

“Let’s be positive about Friday and get the conviction that we can do it”.

“This team has gone through battles and people have lost hope. Once again We will give hope back to the entire nation on Friday by securing a ticket to Tokyo”, Mr reiterated.

The president of the GFA arrived in Cairo on Monday evening and joined the leader of Ghana’s delegation to the U23 AFCON Frederick Acheampong to motivate the team before Tuesday’s match.

He advised the team to ignore all their challenges and focus on achieving their objectives.

The Black Meteors will focus on preparing for Friday’s semi- final play off match against South Africa to fight for a win that will see Ghana through to the Olympic Games.

The third place match will kick off at 2:30 pm at the Cairo International Stadium.

Hosts Egypt will play Cote D’Ivoire in the final match at 6:00 pm.