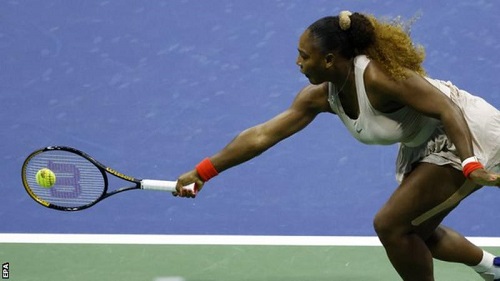 Six-time champion Serena Williams progressed to the third round of the US Open with a 6-2 6-4 win over Russian Margarita Gasparyan in New York.

The American, 38, cruised through the opening set but found the world number 117 a tougher proposition in the second under the Arthur Ashe Stadium roof.

The pair broke each other twice before Williams secured a crucial third break in the 10th game to seal victory.

"She's such a good player - she plays so smooth," Williams said of Stephens. "She looks like she's not taking on energy, then 'blam' - there's five winners. It's not easy."

A handful of the 11 unforced errors Gasparyan made in the first set came in her opening service game when she was broken despite having led 40-0.

Williams then broke again with an excellent overhead to go 5-1 up; although she lost her serve to love in the next, the American bounced back in the following game to break for a third time and seal the set in 35 minutes.

Gasparyan improved markedly in the second set at Flushing Meadows despite going a break down to fall 3-1 behind. The 26-year-old, who recovered from three knee operations earlier in her career, twice broke back and had Williams on the ropes again at 4-4, before the 23-time Grand Slam singles champion eventually held her serve.

The American, who last won the US Open in 2014, broke Gasparyan in the next game to avoid potentially being dragged into a third set.

Williams, used to a large support cheering her inside the Arthur Ashe Stadium, said: "I love the crowd here, but this is something cool. I play in the modern era. There's something more calming about it."

This was Williams' 103rd singles win at Flushing Meadows, having passed Chris Evert's Open era record of 101 earlier in the week. She is seeking to equal Margaret Court's record of 24 Grand Slam singles title.

Elsewhere, Britain's Johanna Konta was knocked out of the US Open in three sets by Sorana Cirstea.

It is a second early exit in a Grand Slam in 2020 for 29-year-old Konta, who lost in the first round of the Australian Open in January.

"My opponent played better than me, that's really about it," said Konta.

"She obviously raised her level and then we were battling toe-to-toe. She was better in the end.

"I did the best that I could. I really fought hard."

Konta, a quarter-finalist in 2019 at Flushing Meadows, had won their two previous meetings, including a controversial Fed Cup rubber in 2017 when Romania captain Ilie Nastase was sent off after swearing at the umpire and abusing Konta and Great Britain captain Anne Keothavong.

Konta was visibly upset and the umpire halted the match for 25 minutes, with Cirstea later claiming the Briton had "overreacted".

There was no hint of controversy about their meeting in New York with Konta seemingly set for a routine win as she broke Cirstea's serve three times in the first set and then again to lead 2-1 in the second set.

However, Cirstea broke back immediately and upped her level to turn the match around.

Konta had break points at 4-4 and 5-5 in the second set but could not convert and was taken to a tie-break.

Cirstea dominated it and although Konta saved three set points, Cirstea levelled the match with an ace on her fourth opportunity.

Poorly executed drop shots were an issue for Konta in the final set, and one particularly feeble effort helped Cirstea get the first break for 2-1.

Konta levelled immediately but was now routinely having to fight to hold her own service games, winning only 34% of points on her second serve during the match.

She fought back from 0-30 down to go 3-2 up but a gripping seventh game - which lasted more than 10 minutes - proved pivotal, Cirstea converting her sixth break point by superbly picking up a volley.

Konta had three break-back points in the next game but they were quickly snuffed out as Cirstea held for 5-3. Excellent serving allowed the Briton to stave off two match points in her next service game, but Cirstea was not fazed as she coolly sealed victory with an ace in two hours and 49 minutes.