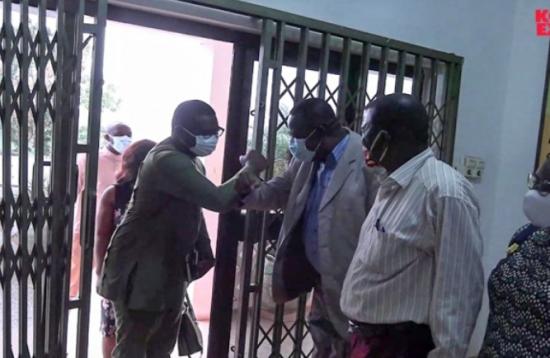 Nana Yaw Amponsah made his first entry at the club's secretariat in Kumasi as he began work as Chief Executive Officer (C.E.O) of Asante Kotoko.

The 37-year-old administrator was met and also introduced to the staff by Board Member Joseph Yaw Adu who, until now, was the Acting C.E.O of the club.

Nana Yaw Amponsah, who was accompanied by two gentlemen and a lady, was shown around following which the office was handed over to him by J. Y. Adu.

The Board confirmed Nana Yaw Amponsah as C.E.O. on Friday. He has been tasked to develop the club both on and off the field.

"Every mighty building was laid brick by brick, if you think of it as a whole it appears impossible to achieve but if you look at it in terms of brick by brick it is very achievable, he said at his unveling ceremony at the Unity Church in Kumasi.

If you hirer a mason to put a building for you, you have to do all you can to ensure that you give him the support to put up a very good edifice that will last generations to come.

Otherwise when he is done, and he leaves one day you will be the one living in that building.

You must give me all the support I need so that I can help put an edifice that would go beyond boundaries."