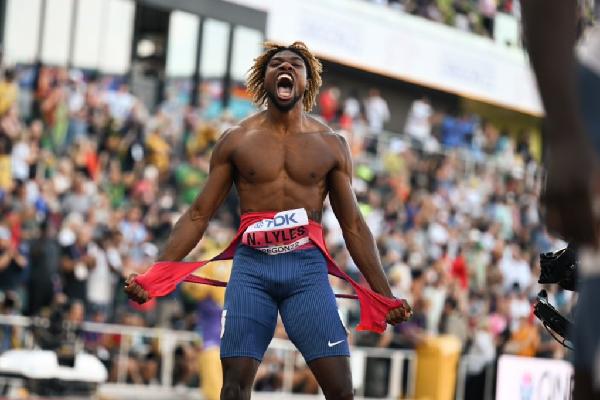 The race had been billed as a duel between Lyles and 18-year-old sensation Knighton but Lyles was in a class of his own, running an exceptional bend before powering home in 19.31 seconds.

His time is one hundredth of a second better than US legend Johnson ran at the Atlanta Olympics in 1996.

It makes Lyles the third-fastest man in history behind Usain Bolt, whose world record stands at 19.19, and Bolt's fellow Jamaican Yohan Blake.

The style of Lyles' victory was as compelling as the statistics however.

The 25-year-old revved up the Eugene crowd before taking to his blocks, left Bednarek and Knighton in his wake and then paraded round the track, race suit torn in celebration and gold medal held aloft, to take the acclaim.

Olympic silver medallist Bednarek finished in 19.77, with Knighton third in 19.80. It completes a US shut-out of the men's sprints, after the 100m, won by Fred Kerley earlier in the week, also produced an American 1-2-3.

The race was a hotly anticipated finale to the seventh day of action. Lyles and Knighton, once apparently close, had crossed paths and words on the same track last month.

Lyles had celebrated his win over Knighton at the US Trials in June by pointing across his rival at the clock.

Knighton then walked out of their joint post-race interview, saying "it ain't finished".

However, Lyles thrived on the big occasion, while Knighton, who ran 19.49 earlier this year, seemed to shrink from it.

"I put myself under no pressure," Lyles told BBC Sport. "I came came out here to give it my 100%.

"That time was always going to come once I got a start I wanted.

"My dad [world 4x400m relay gold medallist Kevin Lyles] grew up in that era racing against Michael Johnson, and I remember the Americans sweeping everything.

"Then we had to watch the Jamaicans dominating. I said to myself, 'when I get there I want to make sure the USA is dominating again'."