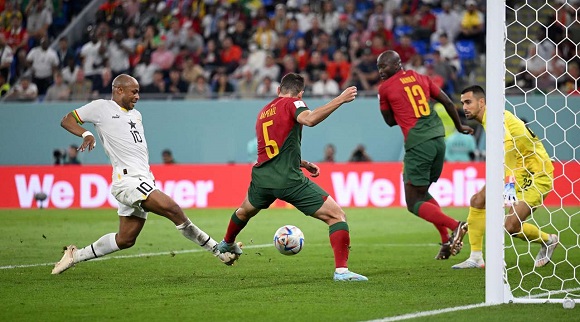 Black Stars captain Andre Ayew is calling for calm after Ghana’s 3-2 loss to Portugal in the opening match of the FIFA World Cup Qatar 2022.

After the goalless first half, Cristiano Ronaldo opened the scoring for Portugal from the penalty spot after he was fouled by Ghana's defender Mohammed Salisu.

"Our game plan was really working well, we were solid. The penalty looks a little bit harsh. But I have a lot confidence in what I saw today," Ayew told the media after the game.

'’We always come out of difficult situations. We need to stay calm, go home, relax and increase our performance. We need to try and score more and concede less," he added.

The defeat means Black Stars are bottom of Group H after Uruguay and South Korea played out a goalless draw earlier on Thursday.